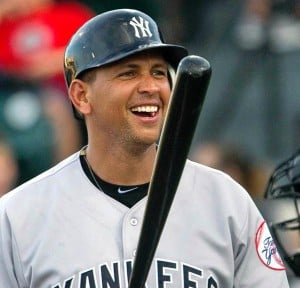 According to reports, New York Yankees star Alex Rodriguez along with eight others will be banned by the Major League Baseball this week in a doping scandal.

The New York Daily News reported citing unnamed sources that major league officials has communicated its plans to the players' union leaders at a meeting at the union's Manhattan offices. A-Rod was among many players who allegedly obtained performance enhancing drugs from a now-defunct anti-aging clinic, Biogenesis, in a scandal revealed six months ago.

It is believed that most of the players will be suspended for 50 games, which almost that they will not be playing for the remainder of the regular season, though some may face longer bans for interfering in the investigation of Major League Baseball into the Florida health clinic and doping by players and lying to investigators. It is also speculated that some players named in the investigation may not be suspended as the probe could not uncover enough evidence to prove wrongdoing.

The suspensions, if imposed, would be the most comprehensive doping bans imposed by a sport that has already seen many of its stars admitting to or accused of doping.

Alex Rodriguez has been sidelined by hip surgery in January and is expected to return in early August. David Cornwell, an attorney for the Yankees third baseman, said Rodriguez would appeal any ban though it may not help in any manner as the investigators are believed to have overwhelming evidence including hundreds of e-mails, phone records and text messages that Rodriguez used performance enhancing drugs in 2010, 2011, and 2012. The documents also suggest that the baseball slugger tried to interfere with the MLB probe by buying documents associating him to the clinic and intimidating witnesses, in addition to using banned drugs.

A-Rod admitted in 2009 that he had taken anabolic steroids from 2001 to 2003 while being a part of the Texas Rangers. Considered one of the greatest players of all time, Alex Rodriguez who dated Madonna, Kate Hudson and Cameron Diaz, among others, is a three-time American League MVP, 14-time All-Star and two-time Gold Glove. A-Rod owns one World Series ring, with the Yankees in 2009 and has the largest contract ever in American sports, at $275 million over 10 years, signed with the Yankees in 2007. His illustrious career may come to an end very soon with Major League Baseball Commissioner Bud Selig probably ready to use the threat of a lifetime ban to force the New York Yankees' third baseman to the bargaining table. The 38-year-old could avoid a lifetime ban if he were willing to accept a lengthy suspension without appeal.