American middle distance runner Jenny Simpson has remarked a tough anti-doping regime by the International Association of Athletics Federations (IAAF) helped her win the 1,500m world title in 2011. The sprinter however added drug cheats prevented her from even reaching the final at the London Olympics in 2012. 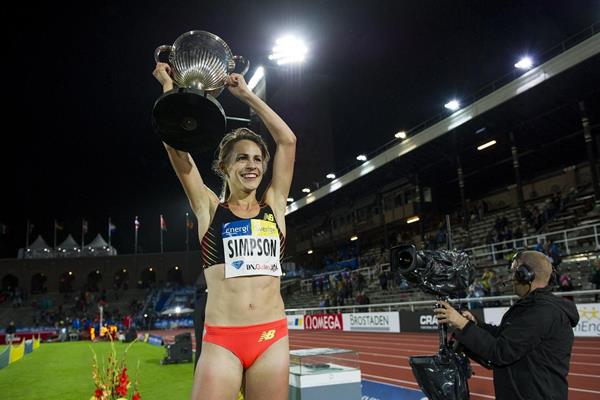 On the eve of the start of the biennial world championship showpiece of the IAAF in Beijing, Jenny urged the world governing body of athletics to improve its efforts so that the sport can get rid of the doping problems. Simpson is in Beijing to win back the title that she won as a surprise winner of the 1,500m in the South Korean city of Daegu in 2011. The 28-year-old said at the U.S. team news conference that she remember arriving in Daegu and every athlete being drug tested and she remembers being really excited to see that development in our sport.

Simpson, winner of the gold medal in the 1500 meters at the 2011 World Championships in Athletics and silver in the same event in 2013, said those sorts of situations are really unfortunate to see in our sport. She however said but her job today is to train and to be prepared to the best of her ability and she certainly supports and encourages the governing bodies that in charge of regulating athletes to really step it up and help catch people.

The American middle distance runner and steeplechaser, referring to the 2012 London Olympics race, said she believes what we're seeing now is a demonstration of a really unfortunate thing where people in the final kept clean athletes like myself from advancing to the final. Of the 10 women who finished the London Olympics race, three have since had their results quashed for doping offences. Asli Cakir-Alptekin of Turkey was banned for eight years and stripped of the gold medal due to abnormalities in blood samples she provided.

On Thursday, outgoing IAAF President Lamine Diack admitted that athletics was in crisis after he spent a month to defend record of the IAAF on doping in the wake of embarrassing database leaks to Britain's Sunday Times and ARD, the German broadcaster. Diack however still claims that 99 percent of athletes are clean.

Britain's Sunday Times and Germany's ARD/WDR broadcaster obtained the results of 12,000 blood tests from 5,000 athletes from a whistleblower at the IAAF. The organizations then requested notable Australian scientists Robin Parisotto and Michael Ashenden to review the data. It was then reported that 800 athletes, competing in disciplines ranging from the 800 meters to marathon, registered suspicious blood values under WADA standards.

In another development, World Anti-Doping Agency chief Craig Reedie has said its Independent Commission (IC) has started its investigation into allegations of widespread doping in athletics. The Commission comprises of Richard Pound, Richard McLaren, and Gunter Younger who are probing the new set of allegations following their probe into previous documentaries by ARD of alleged cover-ups and systematic doping in Russia in December last year.