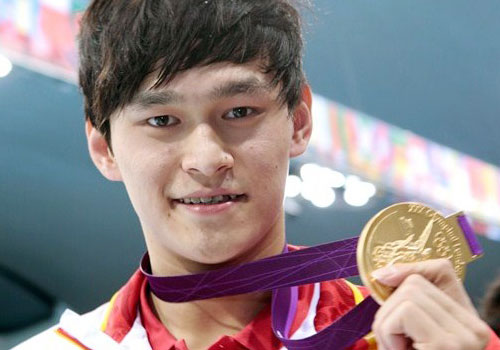 The star swimmer tested positive for the banned stimulant Trimetazidine on May 17 during China's national swimming championships in Hangzhou. His suspension started immediately and ended on August 17, before his appearance in September at the Asian Games at Incheon, South Korea, where he went on to win three gold medals.

Trimetazidine was added to the World Anti-Doping Agency's list of banned substances in January.

CHINADA defended its delay in announcing the sanction by saying it was for no other reason than a backlog of cases. CHINADA deputy director Zhao Jian said the ban imposed on Sun was announced as part of a periodic release of test results and disciplinary measures. Zhao Jian also remarked the support team and team doctor of Sun were also penalized.

Zhao said this is huge bad news but we will not cover it up. He also remarked we usually report the violations quarterly or bi-quarterly and we have to wait until the handling of a particular case has been finished. Zhao added the entire process was slowed down as CHINADA needs to handle almost 10,000 tests over a six-month period and remarked this is the reason why we did not release the reports for the second and third quarters until now. CHINADA deputy director Zhao Jian said Sun Yang in this matter was not completely responsible and the positive test is his mistake, but the mistake is not very serious or negligent. He also remarked the three-month ban is reasonable because of this fact. Zhao also remarked Sun is the most famous athlete in China and is known in the world, which means we need to handle his case very cautiously.

The sanction on Sun was also posted this Monday on the website of FINA, the international swimming federation. FINA also disclosed that the Chinese swimming association also imposed a 1-year ban on Sun's doctor, Ba Zhen.

In a statement, Sun said he accepted decision of the Chinese Anti-Doping Agency and waived his right to have his backup "B'' sample tested. Sun defended himself at a July hearing by saying that the positive anti-doping test was due to an ingredient in medication he was taking for a heart condition and he was not aware that it was banned.

Under World Anti-Doping Agency rules, a therapeutic exemption may be granted to an athlete if a substance is needed for medical reasons and is declared in advance to authorities. Sun told China's official Xinhua news agency that he had taken many doping tests during years of training and competition and he had never failed one before. The Chinese swimmer said he was shocked and depressed at that time, but at the same time it made him cherish his sporting life even more and went on to remark that he will take it as a lesson and be more careful in the future.