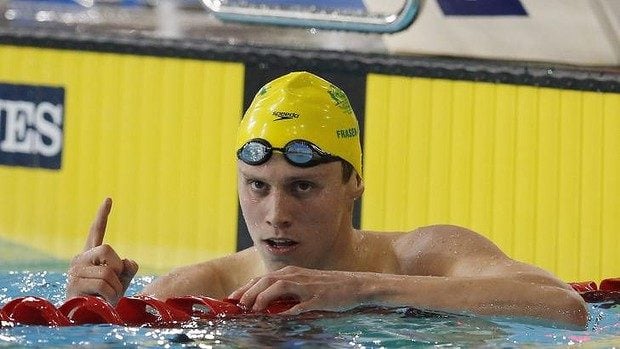 Sports lawyer Tim Fuller will act for the banned swimmer and plans to appeal the ban imposed by FINA immediately to the Court Arbitration for Sport. The sports lawyer said Fraser-Holmes has a ‘clean’ record despite the missed tests.

The third strike was the most costly 10 minutes of the career of Holmes, when he missed FINA testing agents after a dinner at the home of his mother on the Gold Coast.

Australian swimmers are required to provide an hour-long time-slot over a period of three months when they can be tested by FINA and the Australian Sports Anti-Doping Authority drugs testers, unannounced. Missing a test counts as one strike and a two-year ban from sport can be imposed if there are three strikes within 12 months.

The ban on Holmes will however have no impact on the World Championship roster of Australia. In April, Fraser-Holmes opted out of the Aussie Trials to set himself up for the Commonwealth Games in 2018 and the Olympics in 2020.

Fraser-Holmes is currently in Switzerland for a tour and competition. Holmes, who is from Newcastle but trains on the Gold Coast, will appeal to the Court of Arbitration for Sport on the grounds that the equipment used to log his whereabouts was faulty. His lawyer said it was a technical breach but his client was shocked and demoralized. Fuller said Tom tried to log on his whereabouts over a number of days and added his client did everything humanly possible to comply. The sports lawyer added Holmes took all reasonable steps to log his whereabouts but was unable to due to a technical fault and also commented that the world governing body of swimming has still found him to be negligent in this area of compliance.

Commonwealth Games Australia chief executive Craig Phillips remarked the ruling by FINA had the potential to affect the Australian team. Phillips added we will have a strong swim team but it will be difficult to have him missing. The Commonwealth Games Australia chief executive also remarked the situation was an important lesson for other athletes about there being rules around being available for tests and also said we are disappointed, but he thinks the disappointment has to be much stronger for Tom, his family, and his supporters.

Fraser-Holmes had represented Australia at the last three LC World Championships, winning bronze in the 4×200 free relay in 2015. Along with being a two-time Olympian, Fraser-Holmes also has three Pan Pacific and five Commonwealth Games medals to his name.

The Australian swimmer who made his international debut in 2010 is not the only Australian to be guilty of missed tests. It was reported last month that 2016 Olympic silver medalist Madeline Groves and open water Olympian Jarrod Poort are likely to face facing potential bans for allegedly missing three tests over a period of 12 months.