Mamdouh Elssbiay, better known as Big Ramy, is an Egyptian IFBB professional bodybuilder who lives in Jabriya, Kuwait. Interestingly, Big Ramy won his IFBB pro card in 2012, just two years after he started weight training. After that, Ramy was always in the stoplight as a contender in all the professional competitions where he participated. 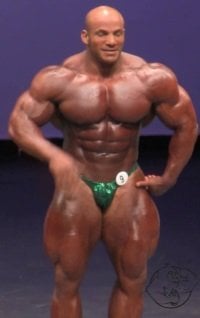 Big Ramy was born on September 16, 1984, into a family of a fisherman. Ramy worked that trade until 2010, which is when he was discovered by Bader Bodai - the owner of "Oxygen Gym." Under the tutelage of Bader and IFBB Pro Dennis James, Big Ramy stepped on stage at the 2012 Amateur Olympia with a whopping weight of 286 pounds and won his IFBB pro card. As a matter of fact, he was given the nickname ‘Big Ramy' for putting on over 100 pounds after just two years of weight training.

In 2013, Big Ramy became a household name in the bodybuilding industry when he unexpectedly won the New York Pro. This was a very surprising win for many because no one in North America had heard of or seen Big Ramy before that event. In spite of that, he won the competition with straight first place votes at his pro debut. Later on, Ramy finished off the 2013 season with an 8th place finish at his first Mr. Olympia contest, which is regarded as the most prestigious bodybuilding competition in the world.

With over 1 million followers on Instagram, Big Ramy has achieved a celebrity status among bodybuilding fans for being one of the biggest bodybuilders of all time. Big Ramy is 5'9 and weighs well over 300 pounds in the off-season.

After the New York Pro, the supplement company "GAT Nutrition" saw the potential in Ramy and signed him to a multiple year endorsement contract. In fact, in an interview, Anthony Presciano, Vice-President of GAT, said:

"I've been in the bodybuilding industry for a while now, but I have never seen an athlete with the sheer size that Big Ramy has."

Unfortunately, after sweeping the competition at the New York Pro with unanimous first place votes, Big Ramy has not been able to bring that same level of conditioning to the stage again. This fact has created a lot of controversy and speculation as to the reason why. Most probably, it might simply be a matter of "too many cooks in the kitchen." In just three years, Big Ramy has switched from coaches Denis James to George Farah to Chris Aceto to Chris Cormier.

It was recently announced that Ramy's newest coach Chris Cormier will be the one training Ramy for the 2017 Mr. Olympia competition. This might turn out well for Ramy, since Chris is a bodybuilder of the 1980's and has a much more ‘old school' mentality than all of Ramy's earlier trainers.

Chris Cormier stated: "I wanted to train him a long time ago, even before I came to Kuwait. I thought he had a couple of holes in his physique that would come back every time he competed." Cormier is confident about his abilities and that he will be the one to bring Big Ramy into the 2017 Mr. Olympia in his best condition to date.

Bader Boodai will be doing Ramy's nutrition for the 2017 Mr. Olympia competition. This is interesting because Ramy has worked with some of the biggest names in the industry. However, despite all the different gurus he's been through, Ramy worked with Bader during his earlier career and had never placed lower than 1st when working with him. What's more, Bader stated: "he's been trying so many different things, and now it's just time for him to go back to his roots."

Boodai is known for working with athletes on their mindset, and he will be helping Ramy get to the mental state he needs to win the Mr. Olympia.

One of the trainers at "Oxygen Gym" leaked the off-season cycle * that took Ramy from 200 pounds to 280 pounds in a single year.

Join the Evolutionary.org forums and have your say on Big Ramy's steroid cycle!

*DISCLAIMER: The cycle above is our opinion on what Big Ramy could have used, this is for information and entertainment purposes only. There is no direct evidence that Big Ramy used steroids or any other drugs, these are rumors or leaks.

10 5
Previous ArticleEvolutionary Radio : Episode #121Next ArticleMore Than 30 Percent Of Athletes At 2011 Worlds Admit To Doping