Due to his cocky behavior, Bradly Castleberry is one of the most disliked social media fitness stars. In addition to that, his major fake weight controversy (which we will discuss in more detail below) did not contribute to his popularity. Born in 1985, Castleberry is listed at 5'10" and around 250 pounds.

Right from the beginning, Castleberry was no different than any other athletically-gifted kid. He practiced a lot of sports and did a lot of running. Interestingly, his first exposure to weight training was at a friends garage, where they had to train with very little equipment. When he was in high school at an age of 15 years, Bradly started lifting weights more seriously and convinced his mom to buy him a gym membership. From this moment on he was hooked on weight training and realized he had a gift for bodybuilding.

As a matter of fact, at just 19 Bradly stepped on stage at his first official bodybuilding show. He later competed in Muscle Mania, where he won his pro card by getting the first place.

After competing for several years Castleberry decided he was burned out, so he took a break from bodybuilding competitions. As a result, he set his sights on playing football and played for 2 years in college. Luckily, his weight training knowledge paid off when it came to the strength aspect of this sport. Moreover, he also learned about teamwork and being a functional athlete - things that were difficult to pick up in such a selfish sport as bodybuilding.

Castleberry then set his sights on powerlifting, where he put up some amazing numbers on video. Unfortunately, his claims have come under a lot of fire from critics, who claim he was using fake weights.

Castleberry has a prominent social media following with 750K followers on Instagram (https://www.instagram.com/bradcastleberry/?hl=en), where he posts pictures and videos related to fitness - poses, training, his fans and other fitness celebrities.

Furthermore, his youtube channel (https://www.youtube.com/user/760BRADLY) has a lot of videos of him working out. However, many of them have a tremendous dislike to like ratio. An example is his last video, which has about a 10 to 1 ratio of dislikes (https://www.youtube.com/watch?v=oWIji8ApgWE) with comments attacking his form, calling him Dingleberry and other insults.

Even with all the hate, Castleberry has parlayed his social media power into a website called Castleberry Nutrition: castleberrynutrition.com

There he sells the typical cookie cutter pre workout, post workout, and apparel. In addition to that, he also offers training services.

Castleberry's biggest controversy, which has made him one of the most hated people in fitness social media, is his fake weight accusations. His lifts claim to be near 800 pounds on squat, approximately 700 on bench and 750 on deadlifts. Keep in mind that these numbers would be all-time world records for a 240-pound powerlifter! 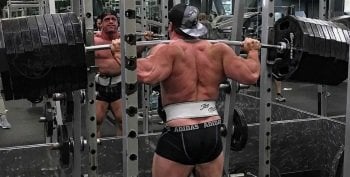 For instance, this video has 2.5M views and shows Castleberry's ridiculous lifts that would challenge even the best powerlifters in the world, and he does them with almost no struggle:

Another video has 1.5M views and shows him curling 405 pounds, which we can all agree is physically impossible:

Both Steve Shaw and Marc Lobliner (who isn't shy about jumping on any opportunity to boost his following) tag-teamed Bradly by challenging him to an old-fashioned weightlifting challenge with the proceeds going to charity. It costs $20 to go watch and Lobliner will donate it all to the "Semper Fi Fund." Lobliner also offered Castleberry a free plane ticket, hotel, food, etc to show up. In fact, here is the video of that:

Castleberry believes that with bodybuilding you must eat extremely strict. He preaches the typical bodybuilder diet of healthy fats, lean proteins, and complex carbs with zero cheat meals allowed.

However, when it comes to powerlifting his diet will allow cheat meals and he believes in feeding the body, especially after a heavy session. For example, a typical post workout meal for him after a grueling leg day is a large steak, rice, veggies, and a large protein shake.

Bradly likes to workout 6 times per week with 1 day off only. He believes in frequent muscle growth stimulation and stretching. What's more, he also advocates the need to push one's body to the extreme to get stronger. Obviously, with his love for powerlifting, we can connect the dots and say he is a big fan of compound lifts. Therefore, his favorites are bench, squats and of course - deadlifts.

Castleberry has never denied steroid use, not that it would matter. Any idiot can clearly see by his physique alone that he uses PED's. This is an example of what he would use for powerlifting to put up huge numbers.

Join the Evolutionary.org forums and have your say on Bradly Castleberry's steroid cycle!