Calum Von Moger is regarded by many as the 2nd Arnold Schwarzenegger, even though Arnold is from Austria, while Von Moger is from Australia, which is on the other end of the world. However, they share a lot of similarities, including their accent, physique, old school mentality, the pursuit for that 70's look, and fun-loving personality. Thanks to these similarities, Calum Von Moger has quickly boosted his social media, where he now has millions of followers. 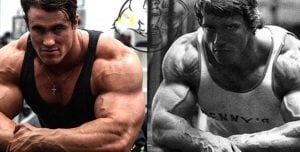 Von Moger has always strived to ignore today's ultra heavy bodybuilder look. Instead, he is more focused on a Steve Reeves kind of body, which is more akin to the 60's or 70's. Thus, Calum wants quality over quantity and his goals are "aesthetic, with perfect symmetry and proportion." Oddly enough, despite of the fact that this is what helped him grow a huge fan base among young people, it is obvious that he is way bigger than those guys of the golden era. His current stats are 6'2" and a whopping weight of 255 pounds, with 20"+ arms and a 50" chest. 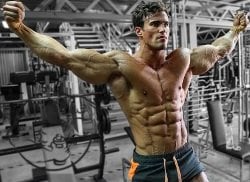 Calum was born in 1990 and he started training with his older brother at a very young age. In those times he was lifting heavy weights with the dream of one day looking as good as his old school heroes – the above mentioned Reeves and Schwarzenegger. The first gym his brother showed him when he was 14 years old was just an old warehouse. That gym had very old and rusty equipment, and the owner would sometimes leave the key to let them train after school because,= otherwise they would sneak in to train at night. Interestingly, Calum's brother was his early motivation, as he continued to chase his sibling's size and strength. This pushed the younger Von Moger brother hard and nurtured in him a love for bodybuilding. 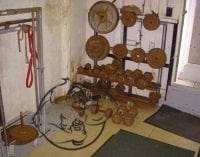 The first competition where Calum participated was in Australia in 2010, and he was around 20 years old at the time. Nevertheless, in spite of the young age, he won, and went on to take the first place in the Junior Mr. Universe. In addition to that, he would also win the NABBA Junior International Championships. Ever since he has been doing a lot of modeling, brand marketing and speaking to kids worldwide about fitness. In fact, this career ambition helped him make the decision to buy a home in Los Angeles, CA.

Von Moger is present in all the social media platforms.

The main reason for Calum's popularity in social media is his desire to keep his fans updated. Therefore, he regularly posts pictures and videos of his workouts, his fitness celebrity friends and about life in general, where he shows the stuff he does during the day.

One of Von Moger's most popular videos was him 'shocking the shoulders,' where he featured a guest picture with his hero Arnold, whom he likes to imitate:

Another popular video that has 4M views shows a chest workout routine:

Von Moger admits to having a 'fast metabolism,' so he can eat more cheat foods than the normal person and still stay lean. In some of his videos, he will go eat junk food, as we can see in this popular video, where he goes to Hooters Restaurant and orders wings:

Interestingly, he has a simple dieting strategy - for bulking he eats more, and for cutting he eats less. Nonetheless, he isn't super strict with his diet like some other guys. For this reason, Calum has no problem eating plenty of meat and potatoes or eating cottage cheese and fruit on a daily basis.

Calum's typical breakfast consists of eggs, fruit, milk, ice cream, and a smoothie. While for dinner he will eat a steak, potatoes, and a side salad.

Von Moger likes to lift heavy on a 4-day split, using strict form and focusing on tension. He likes a low rep and pyramid training approach, where he will increase weight on each set. As you can see in his YouTube videos, Calum is a big fan of compound lifts - deadlifts, bench, squats, and rows are his bread-and-butter exercises. Since he does four days of lifting, in total there are three days of rest per week. His cardio is done outdoors and it is fun, featuring bicycling and swimming.

Unlike most other fitness celebrities, Von Moger admitted that he did use steroids in this video:

There he says that he doesn't talk about steroids because he doesn't want to promote their usage and that the only reason he took them was to stay competitive when he participated in contests. This is a very fair and honest response to the steroid question, so for this Von Moger should be praised. He's a stand up guy for admitting that the industry is full of steroid use.

Now let's take a look at what a steroid cycle could look like for him based on his frame and what his peers are using. This cycle is a 16-week blast for him:

Join the Evolutionary.org forums and have your say on Calum Von Moger's steroid cycle!