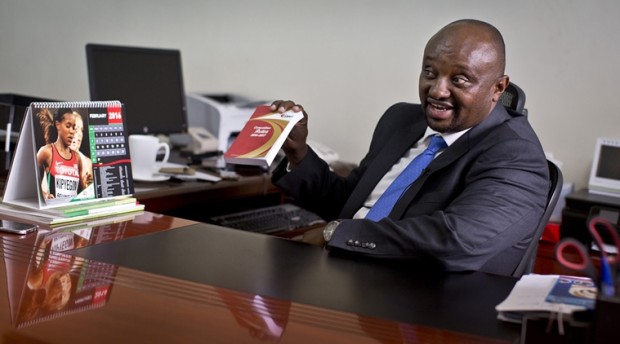 In an interview with The Associated Press, two athletes alleged that Mwangi asked them for a bribe to reduce their doping bans.

On Monday, it was announced by the ethics board of the International Association of Athletics Federations that Mwangi has been suspended for 18 days. The ethics board remarked this decision was taken in the interests of the integrity of the sport pending the outcome of an investigation. The suspension imposed on Mwangi covers all duties and positions in Athletics Kenya and the International Association of Athletics Federations.

In a statement, the IAAF said Mwangi remains presumed innocent until the outcome of the investigation and the determination of any disciplinary charges which may follow from that investigation.

The IAAF ethics board said it decided to impose the provisional sanction on Isaac Mwangi after it was determined by it that an investigation was required in relation to potential subversion of the anti-doping control process in Kenya. The ethics board of the International Association of Athletics Federations appointed Sharad Rao, a former director of public prosecutions in Kenya and current chairman of the judges and magistrates vetting board, to carry out the investigation. Rao is also a member of the Court of Arbitration for Sport.

Meanwhile, Mwangi has again defended himself and denied wrongdoing. In a letter to the Kenyan federation's acting president, Mwangi said the allegations by 400-meter runner Joy Sakari and hurdler Francisca Koki Manunga have caused him a lot of mental anguish and were unsubstantiated.

Manunga and Sakari have alleged Mwangi asked them each for a $24,000 bribe in a meeting on October 16 but they were not able to raise the money. Sakari and Manunga, both police officers in Kenya, tested positive for a banned diuretic at the 2015 World Championships in Beijing; both athletes are serving four-year bans.

In another development, Kenya has been given a deadline until April 5 to show it complies with the World Anti-Doping Agency Code else it could be banned from international athletics. A few days back, IAAF President Sebastian Coe remarked athletics will not regain the trust of the public until they start believing it is not a sport full of junkies. Coe added the IAAF would suspend Kenya if it cannot get its acts right. Coe also remarked we can make the changes but the journey is going to be ultimately when people, and particularly the clean athletes, feel that they have got structures and they have got anti-doping systems that they can trust in, that parents in large part nudge their kids towards certain sports.

Since 2011, more than 40 of Kenya's athletes have failed drugs tests. The country finished top of the medal table at the 2015 World Championships in Beijing with seven gold medals.