The Union Cycliste Internationale (UCI) has announced it has received the reasoned decision from the License Commission to suspend the procedure for the withdrawal of the WorldTour License of Astana Pro Team. 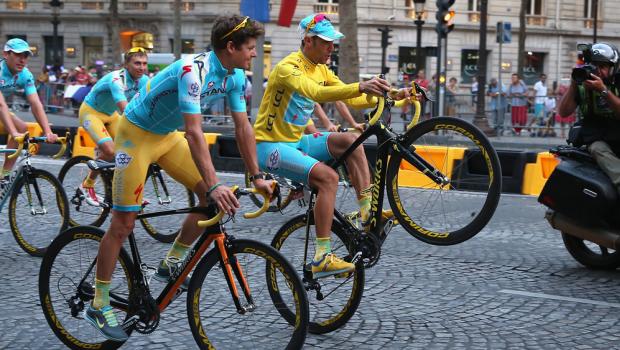 It was therefore concluded by the Commission that in view of the modifications that have already taken place at this stage, those that are announced, the commitment to adhere to the conditions laid down by the ISSUL with the approval of and under the supervision of the Commission, and the absence of further incidents since autumn 2014, it is found that the sanction of a withdrawal, motivated mainly by facts of the past, would not, as of today, respect the principle of proportionality.

However, the UCI License Commission suspended and not dismissed the process sparked by request of the world governing body of cycling to withdraw the WorldTour License of Astana Pro Team. The Commission warned that the process to withdraw License could be reopened if further issues are raised. The License Commission said in the case of non-compliance with the terms of agreement, the ISSUL will notify the commission, which can at any time reopen the procedure of License withdrawal. It was further added that the reopening of the procedure can also occur in the case of new cases of doping or other serious infringements of the rules.

Brian Cookson, the UCI President, who asked for WorldTour License withdrawal, welcomed the decision. In a statement, the UCI Chief said the UCI recognizes the constructive approach adopted by the License Commission. Cookson added we are pleased to note that Astana Pro Team has committed to a process of in-depth reforms thanks to this procedure initiated before the License Commission and added taking into account that the team will be under the supervision of the ISSUL and monitored by the License Commission for the rest of the 2015 season, we are satisfied by this decision which we believe is proportionate.

The UCI President also said we are confident of the fact that the measures that the team has committed to put in place will help it improve its culture, its structures and its systems for governing anti-doping. Brian Cookson also said we believe it is our responsibility to accompany each UCI WorldTeam towards increased professionalism and we firmly believe that the application of the ‘cahier des charges’ will contribute towards this and added finally he would like to thank the ISSUL for its expertise and its collaboration both during this procedure and in the establishment of the ‘cahier des charges’.