Cris “Cyborg” Justino has vacated her Invicta FC 145-pound title to focus exclusively on the UFC. Cyborg made the decision to cement her status as the most dangerous fighter in all of women’s mixed martial arts. 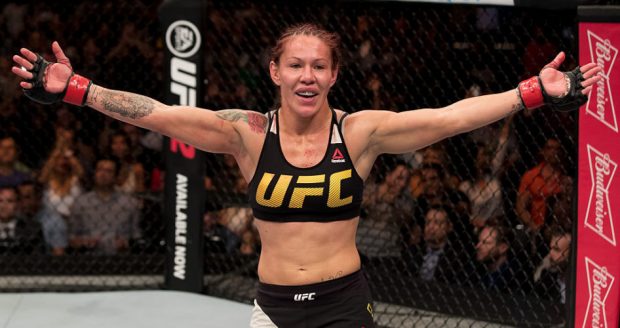 Justino won the title in July 2013 and defended it three times before she made her debut with the UFC in 2016.

Cyborg then formally called out the inaugural UFC women’s featherweight champion Germaine de Randamie (7-3) to a title bout. Justino (17-1), in a video posted Friday on her personal YouTube account, said the UFC will be in Southern California and she would really like to fight in her backyard in America. Cyborg remarked she hope the hand of Germaine is healthy enough to accept her challenge.

The 32-year-old Randamie captured the title by unanimous decision over Holly Holm in the co-main event of February’s UFC 208 card in Brooklyn. The Dutch champion ruffled feathers responding to questions about Justino by bringing up a hand injury she hoped to get surgery on prior to her next fight. Randamie has expressed eagerness to grant Holm an immediate rematch before entertaining thoughts of a Justino fight.

The Brazilian and American mixed martial artist and former Strikeforce Women's Featherweight Champion, commonly referred to by her nickname "Cyborg" or "Cris Cyborg", won the Strikeforce title on August 15, 2009 by defeating Gina Carano via first-round TKO. Justino made her United States MMA debut on July 26, 2008 against Shayna Baszler at EliteXC: Unfinished Business and won the fight by TKO in the second round. Justino made her promotional debut for the Ultimate Fighting Championship at UFC 198 against Leslie Smith and won the fight by TKO in the first round.

Cyborg, a native of Brazil who trains out of Huntingdon Beach, is 2-0 since making her UFC debut last May. The 31-year-old former Strikeforce champion won a pair of 140-pound catchweight bouts by knockout. Many believe the 145-pound division was created by the UFC with her in mind but Cyborg initially turned down multiple offers to fight for the inaugural title and claimed she needed more time to train and cut weight. Cyborg was recently cleared of any wrongdoing from a potential doping violation in December after being flagged by the United States Anti-Doping Agency.

Cyborg also recently challenged American mixed martial artist Ronda Rousey to meet her not in the cage, but in the wrestling ring. She made the offer replying to a video by wrestler Gabi Castrovinci where she and Cyborg were pulling off some moves in the squared-circle. Cyborg offered a tag-team match pitting her and Gabi against Rousey and any wrestler she wants to team up with

Recently, the WWE’s chief brand officer, Stephanie McMahon said she would welcome former Ultimate Fighting Championship (UFC) Women’s Bantamweight Champion Ronda Rousey to come aboard. In an episode of ESPN’s “His and Hers” podcast, Stephanie remarked she would love to add Ronda Rousey and added she knows that Ronda loves WWE, and we certainly love her, so it would be a match, no pun intended, made in heaven.