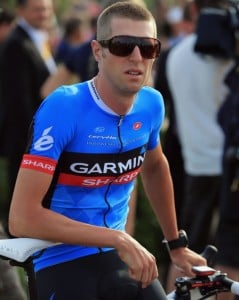 Ryder Hesjedal, the Canadian professional racing cyclist for Garmin-Sharp who won a silver medal at the 2001 Under-23 world championship, has admitted to doping more than a decade ago.

The admission by Hesjedal came after allegations from disgraced Danish cyclist Michael Rasmussen that the Canadian cyclist used banned products, including erythropoietin (EPO), dating back to the 2003 season. Hesjedal took doping advice from him because of his desire to compete in the 2004 Athens Olympics, Rasmussen wrote in his new book Yellow Fever. The Danish cyclist also revealed that two other Canadians, Seamus McGrath and Chris Sheppard, received advice.

In his book, Rasmussen wrote a good result in the 2003 World Championships could send them to the Olympics in Athens in 2004 and added that they moved into his basement in August, before he went to the Vuelta a Espana, and right after he had ridden the Meisterschaft von Zurich. Rasmussen remarked they stayed there for around two weeks and he trained with them in the Dolomites and taught them how to make vitamin injections and how you took EPO and Synacthen (cortisone).

The 32-year-old Hesjedal issued a statement that read that he sincerely apologize for his part in the dark past of the sport and rendered his apology to everyone in his life, inside and outside the sport, to those that have supported him and his dreams, including friends, family, the media, fans, peers, sponsors, and riders who didn't make the same choices as him all those years ago. The cyclist's father, Len Hesjedal, expressed support for his son and remarked it is time to move forward.

Cycling Canada after Hesjedal's admission said allegations towards Hesjedal, Sheppard, and McGrath are another example of why the International Cycling Federation (UCI) needs to come to an agreement with the World Anti-Doping Agency on a way to deal with such allegations of historic doping. The statement also read that the WADA code has a statute of limitations of eight years. As such, even if these three athletes admitted to these allegations, this information in and of itself, would not result in anti-doping rule violations. It was further remarked that Cycling Canada has always taken a strong stance against doping and we wish to reiterate that doping has no place in our sport and those that break the rules will be punished to the fullest extent allowed by the anti-doping regulations.

In a statement, retired Canadian cyclist Michael Barry said Ryder's admission to having used performance enhancing drugs only reinforces the need for a truth and reconciliation process. He added that the culture in professional road cycling has changed greatly and the sport is now much cleaner than it was six years ago but for the culture to change completely, transparency must be encouraged. Barry also said that riders, staff, and officials must not fear speaking the truth and when they do, real reforms will follow.

United States Anti-Doping Agency CEO Travis Tygart in a statement said we continue our ongoing investigation into the sport of cycling, and have also been urging the UCI to take the decisive and transparent action it announced over a year ago to truly set the sport on a new foundation for the good of clean athletes.