Rich Piana and Dallas McCarver were two of the most famous bodybuilder freaks in the fitness world, and they both died back to back about 3 months ago. The autopsy of Rich Piana came out and left many questions lingering (you can read about it here https://www.evolutionary.org/rich-piana-autopsy/ ), while the McCarver autopsy seems to shed more light on what happened. 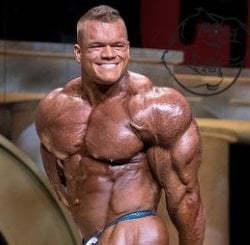 Dallas was born in 1991, in a small rural Tennessee town, and this led to his nickname "Big Country". He was an excellent football player in school, and also a weightlifter. After high school, he started to focus on just bodybuilding and would go on to win his pro card at just 21 years old, winning 3 out of 5 IFBB contests. Even at his young age, he managed to place 8th at the Mr. Olympia last year and his future looked very promising. Many analysts projected him to be a top 3 Olympia finalist during his 30's.

Unfortunately, he would not make it past 26 years old.

His last words to girlfriend Dana Brooke was "I love you. Goodbye". She would report that Dallas was fine earlier in the day, and even had a workout, and was planning a quiet evening at home cooking dinner.

That dinner would be his last.

On August 22, 2017, Dallas was found unconscious during the night by a friend at his home. He was quickly rushed to the hospital where he would be pronounced dead. The initial reports blamed choking on food as his death. Three months later the autopsy would be revealed, and it had some interesting findings, which had nothing to do with choking, and everything to do with his heart health and more.

Anthony Roberts broke the autopsy findings and you can read the full report here: 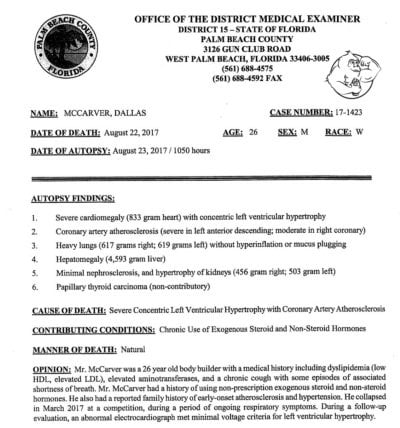 Let's take a look at the results and then analyze what happened and hopefully learn from his mistakes.

This means that the muscle wall on the left chamber of his heart thickened, which likely resulted in an abnormal heart rhythm (arrhythmia) - this would have led to cardiac arrest. So a blockage could have occurred causing a heart attack.

1. Severe cardiomegaly 833g heart with concentric left ventricular hypertrophy: A normal human at his age would have a heart of about 300g, so his was almost 3X normal size! Rich Piana, by comparison, had a heart of 670g and was 20 years older. This fact should scare the crap out of anyone in their 20's who wants to copy this sort of lifestyle.

2. Coronary artery atherosclerosis (severe in left anterior descending; moderate in right side): They did say he had a family history of high cholesterol, but this would also be caused by insane drug use and poor diet of too much meat and not enough omega 3's. It is extremely rare for someone his age to have this issue, and it was a combination of things causing it. This condition also shows he had damaged arteries in his kidney's.

The 4 other things the autopsy found were:

3. Heavy lungs (617g right; 619g left) without hyperinflation or mucus plugging: Being a big guy this is probably normal.

5. Minimal nephrosclerosis, and hypertrophy of kidneys (456g right; 503g left): Again, he was big so bigger organs are somewhat normal. However, it's definitely not healthy!

6. Papillary thyroid carcinoma (non-contributory): Although this didn't cause his death, this is something very scary for a 26-year-old to have, and he may not have known he had it. Abuse of growth hormone could have easily caused this cancer to grow quicker. Many of us may have cancer in our body and not even know it, this is why checkups are important.

Toxicology report: Unlike Rich Piana, they did have this report.

Dallas had caffeine in his system, which isn't uncommon. But it in this case with already an enlarged heart stimulant use will increase the chance of problems, and caffeine has minimal benefits to bodybuilding (even counter productive in many ways), so he should have eliminated it from his diet to help his heart health.

Too many people abuse stimulants, I always see 20somethings walking out of the gas station with 2 or 3 energy drinks in their hands. Most pre-workouts are chalk full of stimulants.

Dallas tested positive for weed. In my opinion, recreational drugs have no place in bodybuilding, and like caffeine has absolutely zero benefits to fitness or health. 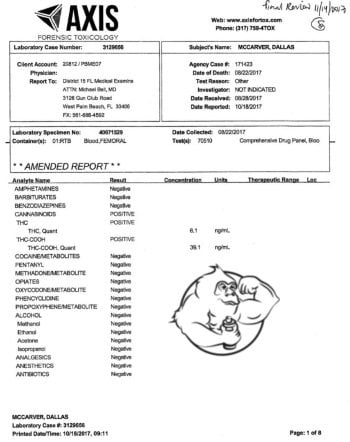 Other recreational drugs: None

Steroids: The autopsy noted that "Chronic use of exogenous steroid and non-steroid hormones" were contributing conditions.

Of all the main anabolic steroids, trenbolone is the most potent and harsh on the system. Bostin Lloyd has admitted on an evolutionary.org podcast that he takes as much tren as will fit in a syringe. If this is what all the younger guys are doing, I have little doubt Dallas was using +1g (1000mgs+) of Tren a week. You can read more about tren here: https://www.evolutionary.org/trenbolone 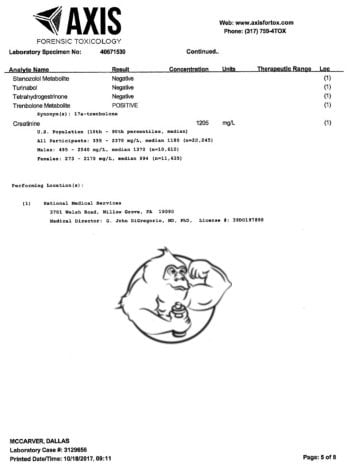 In my own experience trenbolone has sent my cholesterol up 20-30 points and my blood pressure sky high. Abusing tren will cause major heart issues. There is no doubt in my mind that Dallas failed to pay any attention to the red flags of how trenbolone obliterated his blood work, abusing it non stop without breaks. If you have heart issues then you have no business using tren, fix your heart health first! Dallas should have taken a long break from steroids to give his heart a break. 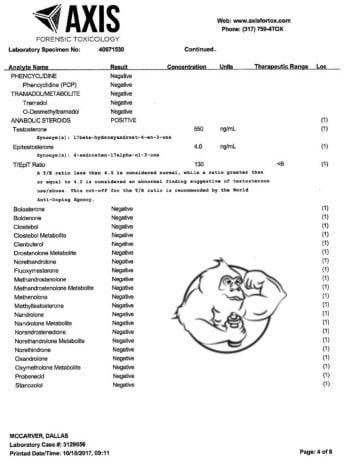 This entire thing could have easily been prevented. Dallas abused stimulants and steroids, and nobody can deny that because we have proof in this autopsy. It was a combination of his sheer size and lifestyle which killed him at just 26. Very sad day for us.

Join the Evolutionary.org forums and have your say on Dallas McCarver's Death!