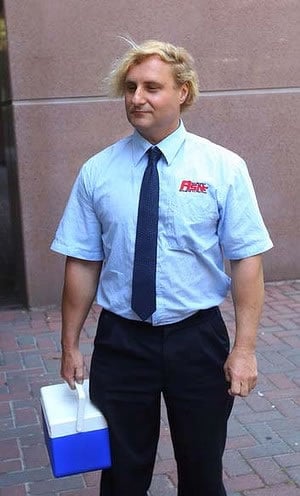 The man dubbed "The Gazelle", Darren Hibbert, may be waging a fresh legal battle after his long-term employer, Advanced Sports Nutrition, stood him down.

Hibbert was sacked by the supplements seller without notice after he was considered as a central figure in the Australian Sports Anti-Doping Authority's investigations. The work phone of Hibbert was disconnected and he contacted his legal team immediately about unfair dismissal proceedings. This was when the founder and director of Advanced Sports Nutrition Peter Memete told Hibbert his contract was "on hold" and would be reviewed in a fortnight. Hibbert remarked that he was initially sacked but now he has been stood down and added Memete is going to help him out by paying him for the next two weeks and then he will re-evaluate after that.

Darren Hibbert went on to add that Memete will probably speak to other people and get their opinions and said the thinking of Peter is that with everything going on and all the publicity, it's going to hurt his reputation. Hibbert went on to remark that regardless of whether it increases sales, he's worried it will hurt our brand name for future customers because they will associate us with the ASADA drugs scandal. Darren Hibbert also added that he is very disappointed because he supplied supplements to Essendon and said so we're all involved in it together. Hibbert said the publicity (even when it was negative) ASN received during the drugs saga boosted sales and people didn't know before what Advanced Sports Nutrition did, it was like we were a secret little company which supplied athletes with top-of-the-line sports supplements. He added it has increased product awareness, so he can't see what the problem is. Memete, who has worked with Hibbert for over a decade, said Hibbert has to clear his name and said there is some chance of him making a return to the company.

Meanwhile, Hibbert has maintained he never administered illegal performance enhancing drugs to players. Hibbert was geared for a meeting with the Australian Sports Anti-Doping Authority and came with an esky full of ice-cream. But he left with a possible fine of $5100 after he declined to cooperate during the interview. Hibbert said we challenged the validity of the disclosure notice to attend interview and produce documents under the Act and said he turned up at the meeting, there was a problem there with some documents and the meeting was concluded. He added that we have always complied with the WADA code and said all his job is to help athletes recover from any injuries they have or help them recover better and remarked he basically help professional athletes like NRL players with their diets, supplements, and recovery.

Hibbert went on to remark that ASADA seem to be confused about what protein peptides are and they would like to find out more so they can work out whether athletes have taken performance enhancing drugs. He also remarked Rugby league is a very physical game and the guys have got to come up every week to play and there wouldn't be a player come off the field after any game without some sort of injury or soreness.