David Laid is a 19-year-old social media fitness celebrity, sponsored athlete, and model. David has been able to tap into the huge teenage fitness online community. Even at such a young age, he has quickly grown his marketing brand using youtube and Instagram, as an inspiration to many skinny teenagers. His current stats are 6'2" and 190 pounds. 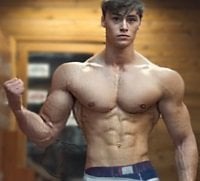 David was born in Estonia, which is a Baltic country on the border of Russia and Latvia. Tragedy struck his family when he was only 2 years old; his father had a boating accident which was fatal. His mother decided to move to the U.S. for a better life a few years later.

At 14 years old, he weighed 98 pounds, even at his tall height, and would deal with a lot of teenage bullying. He would suffer from very low self-esteem, admitting he was an absolute twig and was very insecure about his body. To make matters worse he was diagnosed with scoliosis. Scoliosis is a sideways curvature of the spine and can lead to being disabled if severe.

Doctors advised him that he needed to start weight training to build more muscle mass, so he got into fitness. David would spend his high school years researching weight training, diet, and watching a lot of youtube videos to learn everything he could about bodybuilding. His life as a teenager became just school, watching youtube fitness videos, eating, gym, and rinse and repeat.

His body change (gaining 90 pounds in 4 years) has inspired other skinny and bullied teenagers to follow his lead, to change the way they look, and boost their self-esteem.

David has achieved a huge following even as just a 19-year-old due to his inspirational transformation videos. His youtube channel has a whopping 500K subscribers: https://www.youtube.com/user/computerman91/featured

His most popular videos are his transformation from when he was 14 years old to a year later:

That video has a whopping 25M views and is incredible. He literally went from a skinny twig to ripped and muscular in just 3 years. 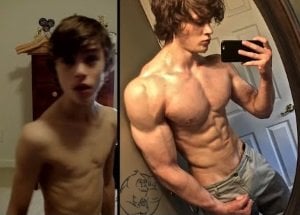 David Laid before after

His Instagram page also has almost 1M followers: https://www.instagram.com/davidlaid/?hl=en . His page features a lot of pictures, workout videos, and pictures with other athlete celebrities such as Mike O'Hearn and Jon Olsson (pro skier).

He has parlayed his popularity into cash by being a Gymshark sponsored athlete, an NY Model, and doing freelance modeling gigs.

Unlike many other young lifters who just want to work biceps, chest, and ab isolation lifts, David is unique because he is a big believer in the large compound lifts. His favorites compound lifts are deadlifts, squats, and bench press. He credits these compound lifts as the secret to his amazing transformation as a teenager.

He trains a lot, going 6X per week and training for 2 hours or more. He follows a 3-day split routine of push/pull/legs.

David has said he has always had a very poor appetite, and that was the main reason he was so skinny earlier in his life. The good news is that being a 'hard gainer' can be advantageous as you get older because you can eat a lot of cheat meals and get away with it. David has been able to utilize this to his advantage, and follows a flexible diet IIFYM.

IIFYM stands for "If It Fits Your Macros". This means he would eat anything he wanted as long as it fit his calorie and carb goals for the day. An example of this is instead of eating an 800 calorie meal of chicken and rice, David will eat a big mac meal or a burrito for the same calories.

David has said he uses whey protein, creatine, a pre-workout, and a multivitamin which are typical supplements.

David has never mentioned he has used steroids. A clickbait video claims he admitted to steroid use – but it was done in Russian https://www.youtube.com/watch?v=fpTSrT2o5LU . However, after watching the video he never mentions steroids so the video was a lie.

It is very likely David does use PEDs, even though he is so young. A SARM and steroid stack he uses could look like this:

Join the Evolutionary.org forums and have your say on David Laid Steroid Cycle! 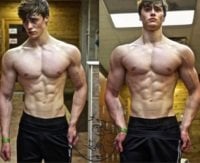 *DISCLAIMER: The cycle above is our opinion on what David Laid could have used, this is for information and entertainment purposes only. There is no direct evidence that David Laid used steroids or any other drugs.