English long-distance runner Paula Radcliffe has remarked doping should be made a criminal offence. 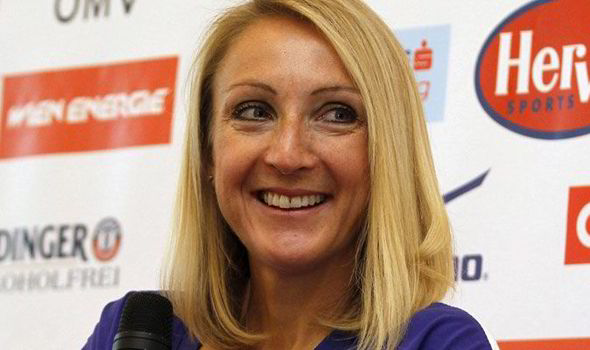 Radcliffe made the comments in the wake of the reigning Olympic and London Marathon champion Jemima Sumgong testing positive for Erythropoietin (EPO) in an out of competition test. Sumgong, the first Kenyan woman to win Olympic marathon gold, was due to defend her London title on 23 April.

Radcliffe remarked she does advocate making doping a criminal offence so that you can face criminal sentencing and criminal sanctions. Radcliffe, the current women's world's best holder in the marathon with her time of 2 hours 15 minutes and 25 seconds, added the costs for those who cheat have to be made much greater and also commented that it makes it easier (if it became a criminal offence) to track and be able to search where you have strong suspicions.

Radcliffe, who ran her final marathon on 2015, said obviously it is not great news for the sport, but she prefers to look on it as actually very good news in that cheats getting caught more now. The Briton also said cheaters should have to pay damages to race organizers for smearing their credibility and rival athletes for indirectly harming their reputations. Radcliffe also said the costs for cheaters have to be made much greater to discourage cheating much more because they damage the sport, they damage their fellow athletes in many ways, by stealing their moments, by putting their own reputations in danger by choosing to cheat, and they damage the reputation of the race.

One of track and field’s most outspoken critics of doping, Radcliffe also remarked criminalization of cheating would also bolster efforts at detection. Radcliffe also said she thinks that is why we have to move forward in terms of making the risks greater, making sure those cheats have to pay back everything they won and also maybe they are liable for the damages they have taken from other athletes.

The English long-distance runner remarked she does not believe in sending dopers to jail but she does advocate making doping a criminal offence, so that you can face criminal sanctions for doping, for supply of doping and for managers and the entourage who encourage and facilitate it as it makes it much easier then to track by using agencies such as the FBI, customs agencies, and it makes it far easier to raid athletes’ houses and be able to search when you have strong suspicions.

Radcliffe went on to recommend a blanket ban for Kenya from athletics similar to faced by Russia. The Briton remarked it looks like at the moment that Kenyan athletes are doing damage to athletics in the same way that the Russians were, and they were heavily sanctioned. Radcliffe also remarked there should be fines and sanctions in my opinion for federations and managers who surpass a certain number of athletes caught doping and that money should then go into the anti-doping budget. She also said when you go over a certain threshold maybe the country does face a ban until they can prove they have got their house in order.

The Sunday Times claimed in 2015 the London Marathon had been won seven times in 12 years by athletes who had recorded suspicious blood scores. This was followed by details of 12,000 blood test results from 5,000 athletes published by the newspaper, in partnership with German broadcaster ARD. Last month, a BBC State of Sport investigation found that more than a third (35 percent) of amateur sports people says they personally know someone who has doped.