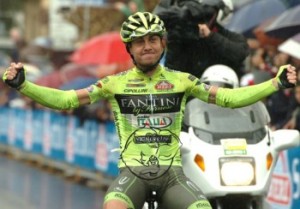 The International Cycling Union has temporarily suspended Giro d'Italia stage winner Mauro Santambrogio after he tested positive for Erythropoietin (EPO) from a sample given on the opening day of the race.

Santambrogio after learning about the failed test remarked he can only say that he is incredulous about what happened and he will be asking for a `B' test as soon as possible. Vini Fantini team director Luca Scinto remarked at this point he should quit cycling because you really can't trust the riders. He added if he had Santambrogio within his hands, he would hit him and added we are all finished at this point. The team director added he had spoken to Santambrogio before the Giro and he told him that there were some rumors going around about him as a lot of people were saying he's riding too fast but he told he was explicit and guaranteed me he was clean and said that he was offended by his request for an explanation.

Santambrogio is the second member from the Vini-Fantini team to test positive for Erythropoietin, after Danilo Di Luca. The 2007 Giro d'Italia winner Danilo Di Luca faces a lifetime ban and has been sacked by his Vini Fantini-Selle team after failing an out-of-competition test. In 2009, Di Luca served a ban for testing positive for the blood-boosting drug Cera at the Giro. In a statement from the Vini Fantini team, team director Luca Scinto said Danilo Di Luca was not part of our group, was not wanted by the team and was inserted into our set-up by our main sponsor Valentino Sciotti, who out of friendship and regional ties to the rider, insisted upon and created the conditions for his addition to the roster. He added the team following the news fired the rider on the spot and told him to leave the race by his own means. Scinto added Vini Fantini-Selle Italia will also open civil proceedings to claim damages from the rider, in accordance with the internal rules that all members of the team signed up to and added we made a mistake by accepting the repeated request from our main sponsor to have faith in a rider they are close friends with and unfortunately this faith has been repaid with an incredible error.

Meanwhile, Renato Di Rocco, president of the Italian cycling federation president, said some cyclists evidently haven't understood and still hope to ruin things at the cost of everyone else. He added word of another doping case on the team would prompt us to widen and deepen our inquiry. The federation may also sue for damages to protect the image of the Italian cycling movement, Rocco added.