UCI President Brian Cookson has remarked that cheating remains "endemic'" in professional cycling but the world governing body of cycling will "no longer turn a blind eye" to the problem. Cookson made this comment after a scathing report into its deep-rooted culture of doping was recently released. 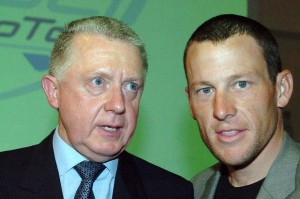 Cookson also said he wants Hein Verbruggen, a former UCI leader, to give up his honorary presidency after the report said the UCI colluded with Lance Armstrong to cover up positive tests at the 1999 Tour de France. The report described Cookson's two predecessors, Hein Verbruggen and Pat McQuaid, two former presidents of the cycling union, as "autocratic" and "weak" leaders who undermined anti-doping efforts. The report said UCI saw Lance Armstrong as the perfect choice to lead the sport's renaissance and added the fact that he was American opened up a new continent for the sport.

The report reads there are numerous examples that prove Lance Armstrong benefited from a preferential status afforded by the UCI leadership. It added that the UCI did not actively seek to corroborate whether allegations of doping against Lance Armstrong were well-founded but fell back to a defensive position as if every attack against Lance Armstrong was an attack against cycling and the UCI leadership. The report severely criticized the UCI for failing to act during the doping era that was dominated by Lance Armstrong. It also revealed that UCI broke rules to favor the disgraced cyclist. The report revealed that the first Tour de France title of Armstrong was made possible only due to the fact that the UCI accepted a back-dated prescription for corticosteroids so that positive tests can be explained during the race. The report did not include any published recommendation after Armstrong said he wants to get his lifetime ban reduced.

The panel wrote Lance Armstrong was considered as a veritable icon by the institution: a cancer survivor, who had managed to beat his disease, helped the sport to recover and to return some credibility to UCI. It was further written that the UCI leadership did not know how to differentiate between Armstrong the hero, seven-time winner of the Tour, cancer survivor, huge financial and media success and a role model for thousands of fans, from Lance Armstrong the cyclist, a member of the peloton with the same rights and obligations as any other professional cyclist.

The report added for a long time, the main focus of UCI leadership was on the growth of the sport worldwide, and its priority was to protect the sport’s reputation and added doping was perceived as a threat to this. It added the emphasis of UCI's anti-doping policy was, therefore, to give the impression that UCI was tough on doping rather than actually being good at anti-doping.

According to the commission, it did not hear from anyone credible in the sport who would give cycling a clean bill of health in the context of doping today. The report said the general view, however, was that doping is either less prevalent today or that the nature of doping practices has changed such that the performance gains are smaller and there was a general feeling that this has created an environment where riders can now at least be competitive when riding clean.