Who is Dorian Yates?
Just when it looked like muscularity could not increase any more, it was Dorian Yates who came along and re-wrote the bodybuilding book.  He was the ultimate “mass monster.”

In spite of being a bodybuilding legend, Yates did not enter the bodybuilding arena in the same way as many other athletes did.  Interestingly, he wasn’t into sports, nor did he have any particular interest in health or appearance.  As a matter of fact, he was a self-admitted bit of a trouble maker — smoking, drinking, and hanging out with his mates looking for cheap thrills was something completely normal for Dorian.  What's more, he also seemed an unlikely candidate for stardom with his scrawny torso and gangly limbs.

However, at the relatively late age of 19, Dorian started releasing some of his youthful aggression by throwing around some barbells, and soon it became apparent that he had a gift.  Within weeks, his strength soared and his once spindly body started to transform.  As a result, Dorian Yates shot into the competitive scene for the Olympia in 1991, where he nearly beat the reigning champ Lee Haney.  In fact, Haney then retired and Yates won this contest the following six years in a row. 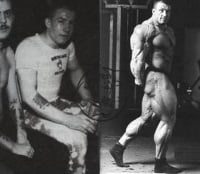 Fig 1. Dorian Yates Before and After

Dorian Yates training program and steroid cycles.
Dorian always trained heavy — as heavy as possible, going to total failure each set at just four to sex reps. Unfortunately, it was this type of training that also led to many injuries and his eventual end to competition.  Nevertheless, while it was working, it worked magnificently.

Unlike many other bodybuilders, Dorian has spoken freely about his steroid use.  Moreover, he also preached on how the drugs have been vilified in the press - “Anything in excess can be bad.  Too much aspirin can kill you.  Once I stopped I didn’t experience any side effects.”

As for his personal choices, Dorian Yates kept things simple.  Due to the fact that he felt testosterone was the basis of all steroids, there would be a lot of testosterone in his cycles - up to 200 mgs a day (ED).  Then, he would “supplement” the testosterone with either some deca durabolin or equipoise — 200 mgs every other day (EOD).  Additionally, he also used 8 i.u.’s of Human Growth Hormone (HGH) daily.  Contrary to the popular belief, Dorian did not use insulin, though his overall size, including a large abdomen, suggested that he actually did use it.  Most probably, that was simply Dorian Yate’s stature, as he was a big blocky guy, and when he grew, he grew bigger and blockier, which started a debate among fans of the sport.

Was this too much?  Where the aesthetics of bodybuilding lost in favor of sheer size?  That debate remains to this day.  For instance, here he is up against Flex Wheeler, who is obviously more cut with better lines, but at 275 pounds, Yates simply out-massed him. 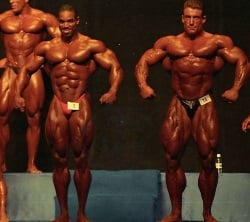 Dorian Yates after bodybuilding
It was predicted that once Yates retired he would turn into an a hulking fat guy, but he slimmed down, went on HRT and still trains daily, though the days of maximum poundage are over.  Today, at age 53, Dorian runs several gyms and remains in fantastic condition.

Written by
Nelson Montana
Nelson Montana is a classical bodybuilder and an industry expert. He was one of the first in the 1990s to write about bodybuilding. He's written for large magazines, like T-Nation and has been on multiple editorial boards. Nelson is a certified personal trainer, he has over 40 years of experience, and he's a senior bodybuilding champion, natural! He's over 60 and he looks amazing.
Have something to contribute?
LEAVE A COMMENT