Two Australian researchers have remarked that it is not easy to imagine elite sprinters to improve performance on statistics rather than surfing the internet for performance enhancing supplements. This research is likely to dissuade sprinters from doping. 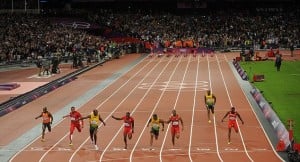 In their paper, "The Doping Myth” that was recently published in the International Journal of Drug Policy, the researchers remarked that their results show that doping as defined by the World Anti-Doping Agency does not produce any difference in 100-meter dash results.

A University of Adelaide team evaluated top 100-meter results from 1980 through 2011 to reach this conclusion. The team used cut-off times of 9.98 seconds for men and 11.00 seconds for women among runners, roughly 20 to 25 percent of whom had failed an IAAF doping test, or admitted to doping. The researchers found no statistical difference in their times when they compared dopers to non-dopers. It was concluded by the research team that average best performances had not improved over the last 30 years. They wrote that since there is no significant regression of times over the last quarter century, the top athletes have not significantly improved their times and added their effort was in vain if they all doped.

The authors however did not expressed doubts that anabolic androgenic steroids and similar drugs have a significant effect on the human body. They were of the view that this effect nevertheless does not necessarily improve performance in 100-meter. It was further remarked that anabolic steroids may overly increase strength of the upper body, which is not a proven route to fast time. The team remarked steroids can inhibit good balance that is critical to run a straight line from start to finish. It was also acknowledged by the team that doping has worked in the past when administered by a state-sponsored program like in East Germany. However, athletes are more likely to engage in random, clandestine attempts at doping these days due to increased drug testing.

The study added that doping as used by some athletes so detected does not improve results and some "doping" agents have obvious physiological or anatomical effects that may not translate into improved results because of the clandestine use of doping that prevents its scientific structuring. The researchers recommended that perception of the effectiveness of doping should be reconsidered and some changes in anti-doping policy may be required for ensuring continued fairness and equity in legislation, testing, and sports in general.

Co-author Aaron Hermann remarked that the incredible world records of Florence Griffith Joyner and Usain Bolt may be due to a particular genetic prowess or because they may have received particularly effective training when young. Hermann added of course others may argue that ineffective doping detection led to their abnormal performances and added however there is no evidence to support this claim. Hermann added he and his colleagues have evaluated distance performances and concluded that no statistically significant evidence that drugs including EPO have an effect. It was added by Hermann that we hope our work will discourage athletes from doping because they are unlikely to receive the advantage they desire, and risk ruining their careers.