Those of you who were watching TV during the 2000's, will remember a very effective and funny commercial about Bob, who walks around with a huge smile on his face all day thanks to the boost of confidence he got from using a supplement.  Interestingly, the commercial was so common that most viewers assumed the commercial was for an actual pharma company drug like Viagra or Cialis.  However, they did not realize that it was just a simple supplement, which could be bought over the counter at their local vitamin store or online.  In this article we will take a look at what enzyte is, the litigation the manufacturer had to go through and why. 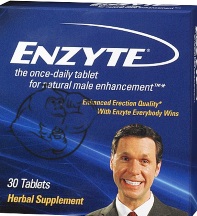 During the 2000's there was an explosion in ED (erectile dysfunction) medications, and consumers were bombarded with non stop commercials, especially for Viagra.  ED usually occurs when blood flow issues prevent a man from getting and keeping an erection.  Hence, it is not surprising that the explosion in the need for ED meds at the time coincided with the growth of poor lifestyle choices and heart health problem.  These two problems are very closely related, since if your heart health is poor then blood flow will not go to the penis, and there will not be a strong erection.

Berkeley Premium Nutraceuticals was the original manufacturer of Enzyte, and they are now called Vianda LLC, based in Ohio.  This manufacturer claimed that enzyte promoted 'natural male enhancement,' but a Baylor University doctor was not keen on those claims.  As a matter of fact, he said it was impossible to increase the actual penis size just by improving blood flow to the penis.  Most probably, it may have been this claim that landed the company in hot water, as after many complaints by consumers and suspicion by the feds the company was raided, and a 112 count criminal indictment was made.

Enzyte company founder and CEO Steve Warshak, and his mother, were found guilty of conspiracy to commit mail and bank fraud, as well as money laundering.  Therefore, they were ordered to forfeit a whopping 500 million in assets and were sentenced to prison.  As a result, the remains of the company were sold to an investment company for 3 million dollars.

Today enzyte is still being sold, but under new ownership, and you can find it sold online.  The ingredients are a simple blend of legal and easily obtained supplements.

Critics have continued to attack the product for being misleading to consumers, who are seeking a 'penis pill.'  Nonetheless, the company admits that it has no scientific data to back any of their claims.  Yet, they assure that their products are tested rigorously for accuracy and contain no GMO or gluten.
With all this, there is another civil lawsuit charging that enzyte doesn't work as it claims (increasing penis size, girth, and firmness).  All in all, the lawsuit is based on absence of scientific evidence that such a pill can have all of these effects.

Amazingly, with all the confusion about what enzyte can actually do, it still manages to sell well online on various websites.  Furthermore, this supplement stays within the law as long as they do not market the product as a drug.  Another requirement to stay legal is that they are not allowed to claim any outlandish benefits in their advertising, although there have still been commercials using the phrase 'natural male enhancement.'

As a final word, we have to mention that users keep complaining these days about improper billing and the product not living up to its claims.