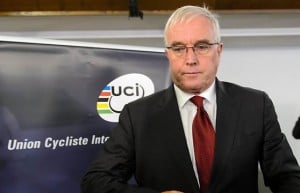 Fahey has stunned everyone by remarking that "everybody doped" in cycling during the era of Lance Armstrong. He added that the administrators of cycling at the time should take some responsibility.

The WADA chief remarked there was a period of time in which the culture of cycling was that everybody doped. He added there is no doubt about that and the administrators have to take some responsibility for that. Fahey, when asked if everyone was literally using drugs, said the evidence that was given by those riders who are teammates of Lance Armstrong, one after the other, they said the same thing -- that you could not compete unless you were doping. Anyone involved during the Armstrong years could not justify their place in the sport's hierarchy at the UCI, said Fahey and added it's not a question of simply saying we'll rule off the line and go on. The WADA head added cycling would only regain credibility when the senior officials on watch during the "debacle" were removed.

Floyd Landis, in an affidavit, revealed dealings with former team director Johan Bruyneel, team trainer Jose Marti, and doctor Luis Garcia del Moral in 2003 about the use of human growth hormone and testosterone. American Levi Leipheimer's affidavit revealed that Team Sky's Michael Rogers (ACT) was one of several cyclists who took part in training camps in Tenerife in the Canary Islands in 2005 with controversial doctor Michele Ferrari. Rogers has however denied being offered drugs while working with Ferrari and the T-Mobile team.

Fahey also remarked that he is presently evaluating the option of an across-the-board amnesty for drug cheating athletes. He added the idea has merit and would be considered after the appeals process of Armstrong had run its course. The WADA chief added the scope of the findings in USADA report surprised him and he thinks the whole world right now is looking to see what is cycling going to do about the problem that clearly is being demonstrated.

In another development, Fahey has announced the introduction of a 'steroid passport' to help catch drug cheats and pledged to ‘catch the cheats behind the cheats’ by cracking down on doping violations by coaches, agents, and physiotherapists. Fahey also advocated for a "full menu testing" and said some anti-doping organizations are undertaking testing and not ticking the square for testing, say, steroids and that will be eliminated in the code. He also said this is part of ensuring we have the best machinery to beat the cheats.