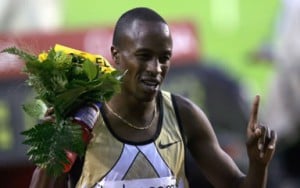 Last year, 17 athletes of the country were caught for doping at local and international championship that is a staggering number thrice the combined total for the previous decade. Kenyan authorities were publicly criticized by the World Anti Doping Agency (WADA), which established a task force for investigating the allegations of further problems besides formulating plans to set a new blood-testing centre in Nairobi. Kiplagat has accused foreign "bogus" coaches behind the growing spate of doping numbers and claimed they are keen to make use of any means to have their athletes win without caring about their own reputation.

Kiplagat remarked Kenya is under the spotlight by WADA over the influx of athletes taking banned substances and these coaches and physiotherapists, who want quick returns, are behind all this. He went on to add that these bogus coaches target unknown athletes, the very ones who have been caught for doping and this is because elite athletes know the punishment. The Athletics Kenya chairman also remarked but upstarts are working hard to make a name and these coaches are exploiting them to go through a short-cut - we will deal with them and also remarked they came in on tourist visas, some as journalists and photographers - but they are now engaging in coaching and being athletes' managers contrary to their entry permits. Kiplagat added they disregard the law and renewed their tourists' permit without the Government detecting it and you cannot operate contrary to the specification of your permit in other countries and he wonders why Kenyan laws are being ignored. He also remarked we are asking the Government to act fast and react with speed to such violations.

Isaiah Kiplagat also blamed foreign coaches behind the growing count of Kenyan athletes switching nationality to represent other countries over recent years. Saif Saeed Shaheen is the best known example of an athlete switching his nationality. The athlete, previously known as Stephen Cherono, was given an alleged U.S. $1 million to become a Qatari citizen after he represented Kenya his entire life. Albert Chepkurui, now Ahmad Hassan Abdullah, also became a citizen of Qatar for a reported hefty amount. Both Shaheen and Chepkurui claim that they have agreed to net $1,000 a month from Qatar and not what is being reported in the media. The Kenyan Ministry of Sports made efforts to halt the defections of athletes like Bernard Lagat, who is now the U.S. record holder in the 1500m indoors and the 1500m, 3000m, and 5000m outdoors. The issue behind this nationality switches is attributed to heavier tax imposition on Kenyan athletes on their foreign earnings. Known for being the best middle- and long-distance runners in the world, Kenyan athletes often face the issue of double taxation as Kenya lacks a tax treaty with foreign countries.