Tegla Loroupe has blamed foreign coaches for an increase in the count of doping cases involving Kenyan athletes. In the last two years, more than 30 Kenyan runners have failed doping tests to brought shame to the country. 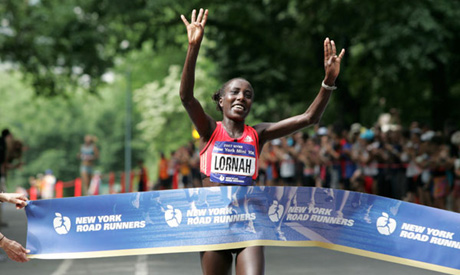 Loroupe, who was the first woman from Africa to win the New York Marathon and the three-time World Half-Marathon champion, blamed foreign coaches for the increase in positive doping cases in her home country.

Loroupe remarked she does not blame Kenyan coaches as the athletes are being represented by foreigners. Tegla Loroupe also remarked she thinks the Government has to be very concerned about this because it's a shame for the country and also for our athletes who are naive as they don't know much about the issue of drugs. She also commented that foreigners see the athletes from Kenya as a source of income and therefore they can do anything. Loroupe went on to add that we need to cut the roots and said athletes shouldn't follow these managers because they will go and destroy any athlete. She also remarked sports should be free and we have to fight with our own strength.

A few days back, Rita Jeptoo was suspected to have tested positive for the banned substance Erythropoietin (EPO). Rita, one of the nation's most successful marathon runners, was accused by her estranged husband of long-term doping that started in 2011. The marathon circle has been left stunned with the positive drug test of Rita. The World Marathon Major's postponed its awards ceremony, where the Kenyan runner was set to receive a share of the $1 million (£620,000/€800,000) prize pot after she won the Boston and Chicago Marathons in back-to-back years.

Jeptoo's Italian agent, Federico Rosa, and her coach, Claudio Berardelli, have denied any wrongdoing after the positive test of Jeptoo. It is interesting to note that the reputation of Rosa is not so clean as he claims. Mathew Kisorio, one of his athletes, tested positive for anabolic steroids at the 2012 Kenyan Athletics Championships though he remarked that neither Rosa nor Berardelli had anything to do with his failed drug test. In the same year, Jeptoo's training partner Jemima Sumgong failed a drugs test after the Boston Marathon. She was banned for two years but the decision was later reversed as the localized injection for bursitis was permissible under International Association of Athletics Federations anti-doping rules.