Frank Richards is considered a forgotten IFBB pro bodybuilder. He was almost on par with all the great bodybuilders like Arnold Schwarzenegger, Franco Columbu, Frank Zane during the 70's, but he never got the popularity in the United States because he was from the UK (plus some unfortunate circumstances). Perhaps nobody had such a long start and finish in the history of bodybuilding, as Frank would compete from 1967 to 1998, with long gaps in between. 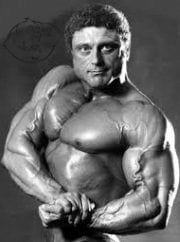 Frank was born post WW2 in England. He was a gifted athlete during high school with track sports like hurdles and sprinting. He would train with weighted boots and do leg weight training to build stronger legs, which got him interested in weight training.

He took an interest in bodybuilding magazines and dreamed to one day go to America and bodybuild too. He started working out at a boys club, which had a small weight room, where he would train there for the next year. Yet, he knew he needed to find a better gym if he were to take things to another level.

Frank was mentored by the owner of a barn gym on a farm named Harry Catterall. He let him work out there for free and would teach him the basics of weight training. The barn weight room was a much better environment for him.

In 1964, Frank traveled to the USA and met up with some of the greatest up and coming bodybuilders of that era. He specifically befriended Arnold Schwarzenegger, who would train with him back in London. This networking eventually led him to be noticed by Joe Weider, who convinced him to go to New York. He would live with his good friend Arnold and they would train together every day, both striving to be the best bodybuilders of all time. They also spent time in California working out at the famous Golds Gym.

Frank returned to England because he missed his family back home. Afterwards, he competed in the Mr. Universe competitions in the late 60's finishing in the top 6 every year. He also won the 1969 Mr. Britain and Belgium Mr. World. In 1970, he won the NABBA Mr. Universe class 1.

Frank was easily on his way to becoming one of the best bodybuilders of all time until disaster struck. Frank's full-time job was working for British Rail. One day he fell onto the track, broke his leg, and punctured his lung instantly, he came close to being decapitated. He was lucky to even be alive.

He would have to take a long time off of training to recover. After more than a decade, he started training all over again in 1984. He had lost 70 pounds and was down under 180 pounds.

After lifting for a few months he quickly built back a lot of size thanks to muscle memory. He was a guest poser at a local competition and the crowd cheered for him. His comeback was on full display.

The 1985 Mr. Olympia was held in Belgium, and he was invited to guest pose. Lee Haney would win 1st place but surprisingly Frank would end up getting 10th place, even though he wasn't even technically competing. He would compete in several big contests the next year and finished 3rd place in all of them, including the World of Champions.

He was back rolling, even in his 40's, and doing well until once again disaster struck. This time he was stabbed randomly during a fight at a restaurant. Even after all that, he came back again in his 50's and competed at the 1997 Arnold Classic (12th place) and 1998 Melbourne Grand Prix (7th place).

There isn't much of anything on Frank Richards on the internet which is a shame, but I did find a few really cool videos of him that will give you an idea of how talented he was.

The first is a video tribute of him with more background and pictures:

The next is him guest posing:

And the final one is him at the 1985 Mr. Olympia after his amazing comeback, keep in mind he was 40 years old in this video!

Frank is now spending his time teaching seminars on bodybuilding in England. Without 2 really unfortunate incidents, in my humble opinion, Frank Richards would have been at the level of Frank Zane, Arnold, and the other great 70's/80's bodybuilders of that era. Instead, he is a forgotten golden era bodybuilder.

There isn't very much information out there on his training/diet philosophies, but I was able to find some information from guys who trained with him.

Frank followed what we would know today as a ketogenic diet. This means he would avoid grains, sugar, and most fruit. His diet staples were meat, greens, berries, nuts, seeds, and high fats. His macros were very high fat, moderate protein, and very low carbs. 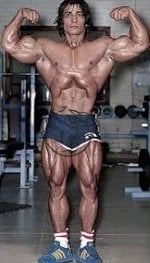 When it came to training, guys who trained with him would say he was very strict when it came to breathing, using proper form, and staying consistent. Frank was one of the hardest working bodybuilders because he had to catch up to other guys – mainly due to his major setbacks.

Frank likely used similar cycles as others during his era. They did not use as much gear as guys do today. His cycle looked something like this:

Join the Evolutionary.org forums and have your say on Frank Richards Steroid Cycle!

*DISCLAIMER: This is for information and entertainment purposes only. There is no direct evidence that Frank Richards used steroids.