Shelly-Ann Fraser-Pryce, the Jamaican track and field sprinter who hit the headlines during the 2008 Olympic Games, has remarked she avoids all supplements. The sprinter said only takes vitamins that can be bought in a pharmacy and added she wants a third consecutive Olympic 100m title. The world and double Olympic 100m champion also declared herself as a certainty at the Commonwealth Games in Glasgow. 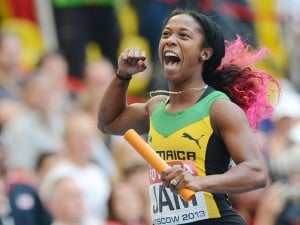 The Jamaican sprinter said even though the United States are not there, and people think the rivalry between Jamaica and the US is what keeps us going, there are a lot of others: Nigeria, with (Blessing) Okagbare, Australia, with Sally Pearson, who’s been doing well. She added it is also exciting for her as she wants to see the opening ceremony as she has never been to one and remarked Nesta Carter (her training partner at the MVP club) wants to go as well.

Shelly-Ann Fraser-Pryce recently won the women’s 60m at the world indoor athletics championships. She timed 6.98 seconds, the seventh fastest time ever clocked over the distance, while her Jamaican teammate Veronica Campbell-Brown could only finish fifth.

Fraser-Pryce, who served a ban of six months in 2010 after she took a toothache painkiller, said she would not agree that there is a problem in Jamaica but remarked a lot of athletes from the country are naive. She went on to add that Jamaican athletes should try to get more educated and aware about what is out there as it a minefield. Recently, Jamaican sprinters Asafa Powell and Sherone Simpson were banned while Veronica Campbell-Brown, who was originally banned, was cleared of doping because of 'deplorable' mistakes. Powell received a doping ban of 18 months following his positive test for the stimulant Oxilofrine at last summer's Jamaica national championships and has already confirmed his intention to appeal to the Court of Arbitration for Sport. Simpson also tested positive for the same stimulant at the national championships.

The 29-year-old Simpson and Powell are ruled out of the Commonwealth Games in Glasgow in July. It was claimed by Powell that he used a legal supplement, Epiphany D1 that was contaminated with Oxilofrine and the sprinter added that his team commissioned two private laboratories that confirmed that Oxilofrine was present in the supplements, despite it not being listed as an ingredient on the bottle nor on its website. Powell, who won the 100m gold medal at the 2006 Games in Melbourne, said he wanted to reiterate that he have never knowingly taken any banned substances. The sprinter added that he did all the necessary checks before taking Epiphany D1 and it is his hope that the CAS will prove to be a more open and fair avenue for the review of all the facts in his case – facts and truth that were not taken into consideration at his initial hearing.

Great Britain's former marathon world record holder Paula Radcliffe said it is always the athlete's responsibility and remarked he should really run everything through the system before he takes it.