Fremantle veteran Ryan Crowley has been serving a provisional suspension since September after he tested positive to a banned substance. Crowley will appear before the AFL Anti-Doping Tribunal, with a tribunal date to be fixed. 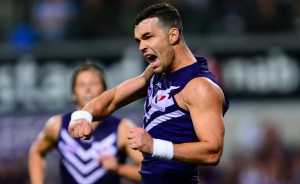 The Australian rules footballer plays as a midfielder and specializes in a tagging role. In his debut match, Ryan Crowley became only the 3rd Fremantle player to kick 3 goals on debut and the goals helped Fremantle to record their first ever win at Skilled Stadium in Geelong. Born on 5 March 1984, Crowley developed into a defensive midfielder or tagger by the end of 2008 and is best known for notoriously playing on opposition stars such as Gary Ablett, Jr. and Daniel Kerr.

AFL's football general counsel Andrew Dillon confirmed that an infraction notice under the Anti-Doping Code has been issued against Crowley.

The 31-year-old faces a two-year ban from the AFL and his positive sample test was taken on a match day after the Dockers round-17 game against the GWS Giants in July. AFL advised the Fremantle Football Club, nicknamed The Dockers, in September last year that the Australian Sports Anti-Doping Authority (ASADA) had issued a show-cause notice to Ryan Crowley.

The club has made it clear that Crowley accepted the suspension but not as an admission of guilt or wrongdoing. Under the AFL rules, acceptance of a provisional suspension does not constitute an admission of guilt. Crowley was allowed to play in all of the Dockers’ games despite the finding after round 17, including two finals appearances.

Fremantle said Crowley is cooperating fully with the AFL and ASADA by agreeing to a provisional suspension and the veteran is waiting for the tribunal to convene and make a finding. During a press conference, Dockers said the banned substance was in a pain killer and it was not prescribed by a Fremantle staff member or doctor.

In a statement, Crowley said he would like to thank his partner Samara, his family, and the club for their support over the past few months. Fremantle president Steve Harris remarked we have a continuing and ongoing duty of care for Ryan, both personally and professionally and also said Ryan’s ongoing health and capacity to cope with this matter have been key areas of focus for the support we have been providing him with.

Dockers' chief executive Steve Rosich said at a press conference that there is strict confidentiality clauses around the AFL anti-doping code and we're hoping this progresses to an AFL tribunal as soon as possible and added that our best understanding at this point in time is that is a matter of weeks away. Rosich said our own risk integrity committee was first made aware of this matter in September prior to Ryan accepting the voluntary suspension on the 25th of September 2014. He added that at the time and until last week that integrity committee was not aware of the identity of the player and our full board were only informed of this matter fully and including the name of the player only on Monday. The Dockers' chief executive added Crowley briefly considered retirement after he tested positive but has opted to seek to continue to play on.