A research study by the University of Freiburg has claimed it has evidence of "systemic" doping in professional football in Germany during the late 1970s and early 1980s. 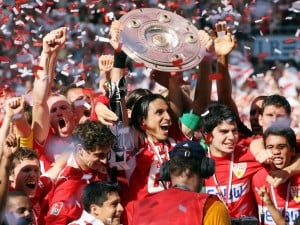 The Evaluation Commission Freiburg Sport Medicine that received new documents supplied by the Freiburg commission in late 2014 disclosed that anabolic doping was common not only in cycling but also in professional football in the country. The commission implicated VfB Stuttgart and SC Freiburg and said doping evidence was found against Bundesliga club VfB Stuttgart and then second division side, SC Freiburg. In a short statement, the Evaluation Commission Freiburg Sport Medicine said by means of the new documents, anabolic doping in a systemic way can be reliably proven in professional football in Germany for the first time.

In a media release summarizing a 60-page report, Andreas Singler, a member of the commission investigating historical doping at the University of Freiburg, said Stuttgart was to a "greater extent" involved and Freiburg - then a second-division team - was also involved in the use of anabolic doping. The commission report also revealed that doping was supported in an organized way by the national cycling association of Germany, the BDR, between 1975 and approximately 1980.

The special commission's statement is based on an in-depth investigation into the files of Dr. Armin Klümper, the former head of a sports medicine department at Freiburg university hospital, who was fined in 1989 for fraud.

Stuttgart claimed that it cannot fully reconstruct events as the study is looking at events decades ago. The club said in the interests of a clean sport VfB Stuttgart wants a complete clarification of the issue and added VfB Stuttgart is not in hand of the mentioned report. It also said the club therefore cannot retrace the evidence basing the accusation or know if and to which point they are true. Stuttgart also went on to claim that Dr. Klümper was at no stage team doctor at the club.

SC Freiburg insisted that it would provide any kind of assistance to support the investigation. The German club said it is against the use of performance enhancing drugs and insisted it had not seen "detailed results of determination or expert's reports."

Ottmar Hitzfeld, the former FC Bayern coach who played for Stuttgart from 1975-78, said he is completely surprised by the reports and cannot imagine that one of his teammates knowingly used doping. Hans-Jurgen Sundermann, Stuttgart coach from 1976-79 and 1980-82, said he cannot imagine that and can entirely rule that out. Rainer Koch, chairman of the German FA anti-doping commission remarked that the commission had not been informed beforehand. Koch added the reports are new to us and we don't know about the findings and also not about a report of the commission and thus can't comment on the topic.

The findings of a comprehensive doping study by Berlin's Humboldt University, commissioned by the Federal Institute of Sport Science (BISp), suggested in 2013 that a systematic sports doping system was used by the former West Germany. The study also raised questions about football in West Germany and said the 1954 World Cup-winning team used the methamphetamine Pervitin. Doubts were also raised about the 1966 finalists as well as the 1974 World Cup winners.