Ultimate Fighting Championship fighter Janigleison Herculano Alves aka Gleison Tibau has received a sanction of two years for anti-doping policy violation, according to an announcement by the U.S. Anti-Doping Agency (USADA). 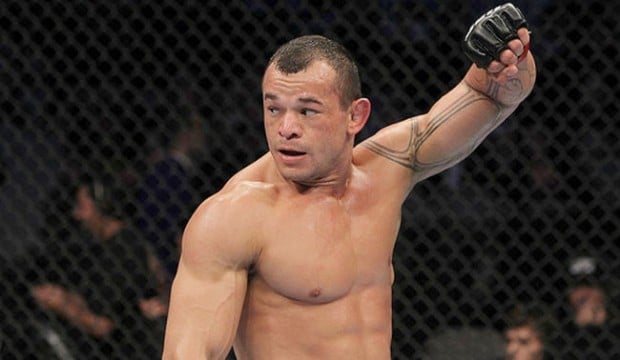 Tibau was suspended by USADA on December 4, 2015 after a potential Anti-Doping Policy violation stemming from an out-of-competition test. It was reported on December 23, 2015 that Tibau had also failed an in-competition test following his win over Abel Trujillo at UFC Fight Night 77 on November 7, 2015.

The Brazilian mixed martial artist who was competing in the UFC's Lightweight division has been a professional competitor since 1999. Tibau was a state champion in Rio de Janeiro in both Brazilian jiu-jitsu and wrestling and made his UFC debut at Welterweight against Nick Diaz where he lost by TKO due to strikes. Tibau started training for mixed martial arts when he was 13 years old. Brought up as a fighter in Kimura team, Tibau was fighting by the time he was 15 years old and trains at American Top Team.

Tibau, one of the UFC’s longest-tenured fighters, who has competed 26 times inside the Octagon since joining the organization in 2006, had earlier released a statement in which he revealed he tested positive for recombinant human erythropoietin (EPO). However, he indicated he was innocent and would investigate findings of USADA. Tibau, prior to UFC Fight Night 77, had never failed a drug test, though he had twice missed weight.

The UFC fighter has been disqualified from all competitive results obtained on and subsequent to October 23, 2015, the date on which his first positive sample was collected in violation of the UFC Anti-Doping Policy. Tibau received the suspension after failing both in- and out-of-competition drug tests in a two-week span late last year. Tibau tested positive for erythropoietin (EPO) in tests conducted on October 23 in Coconut Creek and on November 7 in Sao Paulo. The suspension of Tibau has been made retroactive to November 7, when he submitted Abel Trujillo [1:45] into the opening round at UFC Fight Night “Belfort vs. Henderson 3.” Result of the bout has been overturned by the Brazilian MMA Athletic Commission (CABMMA) to give Tibau a loss, according to the USADA statement.

EPO is a synthetic hormone that is used for stimulating red blood cell production of the body. Erythropoietin is known to increase oxygen transport and aerobic power. EPO is a prohibited substance in the class of Peptide Hormones, Growth Factors, Related Substances and Mimetics under the UFC Anti-Doping Policy.

In a statement, UFC said it recognizes the two-year sanction issued today to Gleison Tibau by the U.S. Anti-Doping Agency (USADA) for violations of the UFC Anti-Doping Policy. The UFC statement added that it secured the services of USADA, a third-party agency, last year to administer its Anti-Doping Policy to ensure that all athletes compete on an even playing field, free of performance enhancing drugs and also said the UFC supports the issuance of necessary sanctions to maintain a clean sport.