Gustavo Badell is an IFBB professional bodybuilder from Venezuela and Puerto Rico. He is best known for finishing in 3rd place twice at Mr. Olympia during the mid-2000's. His peak stats were a monstrous 5'8" 265 pounds, and his nickname was 'The Freakin' Rican'. Here he is at the 2005 Mr. Olympia at his peak:

Although Gustavo was born in Venezuela, he grew up in Puerto Rico. He loved boxing and kickboxing as a kid, but his coach thought he was too skinny and wanted him to start weight training. He admitted he had great genetics as a teenager, so he decided to read up on bodybuilding and nutrition, which led to him improving very quickly.

After easily winning a Junior competition, he quit boxing and decided to focus on bodybuilding full time. He would dedicate the next 5 years to training, diet, and building a great physique as he wanted to turn pro. 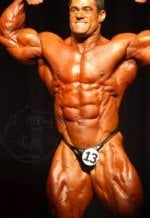 In 1997, he won his pro card at the Caribbean Championships. The next year, he flew to Germany to compete at the IFBB Grand Prix earning 9th place. He also competed at the 1999 Night of Champions and got 14th place. Gustavo would struggle against top-tier competition but did not give up on his dream of one day being Mr. Olympia. He decided to consult some other pros and coaches, putting aside his ego, to improve his training and diet routines. His improvements were on display when he earned top 3 finishes at the 2002 Toronto Pro, 2004 Ironman Pro, and 2004 Strength Pro.

Everyone's dream is to win Mr. Olympia as Arnold Schwarzenegger did many times. It is considered the most prestigious bodybuilding contest.

Gustavo was now ready to compete against the best in the world. At the 2004 and 2005 Mr. Olympia, he finished in 3rd place behind Ronnie Coleman and Jay Cutler. You can watch the video here of the final posedown:

His 2005 highlights also included a win at the 2005 Ironman Pro and 3rd at the Arnold Classic. Some analysts predicted he would be a future Mr. Olympia champion, but he was never able to improve on 3rd place and would fall off the next year finishing 6th. 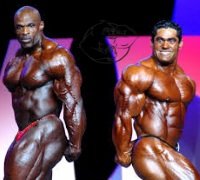 Today, Gustavo does online coaching and does training videos. You can watch a chest workout video where he teaches proper form:

Gustavo doesn't have a huge social media following like some of the younger guys of today, but he does have some cool videos you can check out.

His Instagram has a modest following: https://www.instagram.com/ifbbprogustavobadell/?hl=en where he advertises online coaching and shows pictures of himself.

Gustavo preaches that bodybuilding is harder than professional sports like baseball or basketball because you have to train, diet, sleep, take supplements, do cardio vs. just having talent and playing a game. He argues bodybuilding is a lifestyle that needs to be lived 24/7. 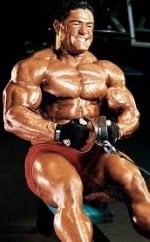 He found that working each body part once a week works best for him. He likes 4 sets with a 12-15 rep range heavy.

Here is how his split looked:

Gustavo blames diet for why he struggled early in his career. He learned how to eat better thanks to more experienced pros like Milos Sarcev, who graciously took him under his wing.

His diet was 7 meals a day. In the offseason, he ate complex carbs made up of potatoes, rice, and oatmeal. He would eat chicken, turkey, fish and red meat. Ahead of competitions, he cut out red meat and restricted carbs.

An example of his breakfast was 15 egg whites, oatmeal, protein shake, and water. His other meals were 3 items consisting of a protein source, a carb source, and vegetables. An example of this concept would be white fish, baked potato, and broccoli.

Gustavo denies steroid use. Since he is a coach, he probably wants guys to believe this so he can sell more programs, but it has gotten him some flack from social media guys. In this clickbait video, you can see an example of that criticism and see a clip of him where he says "all natural, just hard work":

We know that to compete against guys like Ronnie Coleman you need tremendous genetics and lots of hard work. However, you also need steroids. Here is what he probably took leading up to Mr. Olympia:

Join the Evolutionary.org forums and have your say on Gustavo Badell Steroid Cycle! 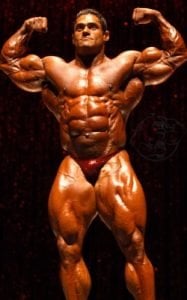 *DISCLAIMER: The cycle above is our opinion on what Gustavo Badell could have used, this is for information and entertainment purposes only. There is no direct evidence that Gustavo Badell used steroids or any other drugs. This article is our freedom of speech.