What is Gynecomastia and What Causes It?

Gynecomastia (gyno), informally known as ‘man boobs’ or ‘bitch tits,’ is the enlargement of a man’s breast tissue that gives it a close resemblance to female breasts. This condition usually takes place when a man’s body is experiencing a hormonal imbalance, especially the one related to high levels of estrogen. Sometimes, improper use (abuse) of anabolic steroids causes estrogen levels to rise above normal, which causeslimited number of female receptors in their body can receive stimuli. 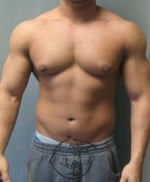 The areas of most concern are the estrogen receptors in the otherwise dormant mammary glands in male breast tissue. When a man’s mammary gland cells become stimulated due to high levels of estrogen hormones attaching and activating their receptors, breasts are sure to grow. In fact, this is the most-dreaded side effect of steroid use.

However, gyno can also be naturally caused by puberty, when estrogen levels rise due to the high testosterone levels that teenage males experience at a certain point of their lives. Nonetheless, it should be noted that gynecomastia is most commonly caused by improper steroid usage, since a very low percentage of males ever experience it during puberty. Steroid-induced gyno is mainly caused by high estrogen or high prolactin levels, which will cause a build-up of fat in a man’s breast tissue.

Additionally, you need to keep in mind that even without steroid use, obesity is a major contributor to gyno cases in teenagers and adult men alike. Since obese men suffer from higher estrogen levels, it creates a bad situation where the estrogen is shaping their chest fat into man-boobs. As a matter of fact, most men that are over 18% body fat suffer from some form of gynecomastia, but most go undiagnosed.

What Are the Early Symptoms of Gynecomastia?

It’s important to outline that you can still get gyno because of improper steroid usage even if you don’t experience any of these symptoms. The above mentioned symptoms can occur in both breasts.

Luckily, most onset gyno is reversible if treatment starts within weeks of noticing the changes. Consequently, only untreated gynecomastia becomes a more-permanent problem requiring surgery.

How do I Know if I Have Gynecomastia Symptoms?

Tenderness around nipple: This is one of the earliest symptoms of gyno and the easiest one to notice. This tenderness is unmistakable, and there are no “maybes” when it comes to what you are feeling. If you just “think” you feel something, you probably don’t because you will surely know that your nipples are very tender to any stimuli. For instance, even when putting on a t-shirt you’ll feel the fabric brushing up against your nipples. Therefore, once you’re sure that you have extreme tenderness, you can begin proper treatment.

Lactating male nipples: “You won’t know if you don’t squeeze” is what I tell guys who ask me about lactating nipples. Once you notice any change in the feeling, density and texture of your nipples, or even notice slight tenderness, you should give them a squeeze under good lighting in order to see if any milky-dew forms on the tip. Those guys who abuse steroids and prohormones without proper ancillary drugs tend to suffer from this side effect quite early on.

Changes in size and shape of the nipple or breast: These are all plain and easy to see, as this kind of changes will be obvious and noticeable to anybody who looks in the mirror from time to time.

Which Steroids can Cause Gynecomastia?

The steroids you inject aren’t supposed to cause gynecomastia in their intended state, and the problems really start only when enzymes in your body convert these steroids into female hormones.

Estrogen-induced gyno from steroid usage is the result of running a steroid cycle without an aromatase inhibitor (AI). Without an AI, the steroids will start to aromatize into estrogen, leading to high estrogen levels and gyno. Meanwhile, an AI prevents steroids from aromatizing into estrogen, which helps keep estrogen levels within the normal range.

Below is a short list of the steroids most commonly known to cause gyno from their conversion to estrogen:

A worthy mention in this article is a set of steroids that have been known to prevent gyno by lowering estrogen while, at the same time, acting as anabolic agents:

What Treatment Options Are Available for Pre-Existing Gynecomastia?

When visiting a doctor, you must understand that most will advise on surgery or maybe no treatment at all. On the other hand, if you go see a plastic surgeon, then he/she will surely sell you on surgery as your best option.

However, in many cases bros can avoid the knife if they just stay consistent with a fat-loss program and a protocol of anti-estrogen drugs. It may take weeks (even months in cases) to remove the appearance of gyno this way, but you can avoid the dreaded surgery.

The best drugs protocol for remove pre-existing gyno from puberty or past steroid usage is to run the anti-gyno protocol 3.0.  The protocol is comprised of nolvadex, letrozole, cabergoline, cardarine, N2Guard and Yohimflame.

Also known as tamoxifen citrate, nolvadex is a SERM (selective estrogen receptor modulator) approved by the FDA for prevention and treatment of breast cancer in high-risk patients. In fact, it was actually Dan Duchaine who speculated that nolvadex could also be used to remove gyno because it is an antagonist of estrogen receptors. Indeed, nolvadex binds to estrogen receptors, which prevents active estrogen from binding in its place. An effective dosage of nolvadex to treat pre-existing gyno is 20-80 milligrams (mg) per day.

Letrozole (femara) is an FDA-approved aromatase inhibitor (AI) used in the prevention and treatment of breast cancer. Interestingly, it is the most-powerful AI available, with studies showing it can drop estrogen levels in women by up to 98%. An effective dosage of letrozole to treat pre-existing gyno is 0.25-2.5mgs/day.

Cabergoline (dostinex) is a dopamine receptor agonist that inhibits prolactin secretion from the pituitary glands. An effective dosage of cabergoline to treat pre-existing prolactin-induced gyno is 0.25-0.5mg/day.

Cardarine (GW-501516) is a PPAR modulator that will promote dramatic reductions in body fat. Cardarine’s powerful effects on fat burning make it extremely effective in treating gyno because it is nothing more than a large fat deposit in a man’s breast tissue. An effective dosage of cardarine to treat pre-existing gyno is 10-20mg/day.

N2Guard is an all-in-one support supplement for steroid users, designed to prevent the negative side effects that steroids have on the body. It’s loaded with 53 different ingredients to promote overall health, detox the body and regulate hormone levels.

Yohimflame is a topical fat-loss product based on yohimbine and alpha-yohimbine. When applied topically, yohimflame will directly increase lipolysis (fat burning) in the area of application. This makes yohimflame a perfect product for burning the stubborn estrogenic fatty acid deposits stored in male breast tissue.

Liquidex AI is a liquid supplement that is for sale over the counter and contains the most powerful aromatase inhibitor you can buy without a script – Arimistane (Androsta-3,5-diene-7,17-dione). This product contains is a very powerful compound that works much in the same way as Aromasin does. It is also a suicide aromatase inhibitor capable of lowering the overall concentration of aromatase enzyme in your system; thus, your steroids will not turn into estrogen-like hormones even after you stop taking it. Needtobuildmuscle.com is the only place to buy legit Liquidex AI.

The best AI choice is aromasin because it is a suicidal AI, and there will be no estrogen rebound when you discontinue usage after the cycle. A dosage of 10mg every other day (EOD) or every day (ED) should be used with every steroid cycle you do with aromatizing compounds, such as dianabol or testosterone.

Meanwhile, high prolactin levels can be prevented by using an anti-prolactin drug like cabergoline whenever using a nandrolone in your steroid cycle (deca, NPP or Trenbolone). A dosage of 0.25mg every other day should be used.