Steroid laws and regulations vary greatly from country to country. In most countries, steroids can only be legally possessed with a prescription. For example, in the United States steroids are classified as a schedule 3 drug under the Controlled Substances Act of 2004, making steroids illegal without a prescription. However, obtaining a prescription for steroids is not so easy because in order for a doctor to write you a prescription you will need a valid medical reason, such as Hypogonadism (Low Testosterone) or Andropause (total androgen suppression).

Even if you are able to obtain a prescription from your doctor, the dosages prescribed will be much lower than what is required for muscle building purposes. What's more, a lot of the steroids used by bodybuilders are veterinary drugs, or are not currently produced by any drug company for human consumption.

There is no doubt that there are a few countries where steroids are legally available for purchase without a prescription, such as Mexico, Moldova and Thailand. However, importing the steroids back to your country is illegal, so unless you plan on moving to these countries for the entire duration of your steroid cycle, you will have to resort to the black market to purchase steroids.

Steroids on the black market

Steroids on the black market come from two main sources: they are either smuggled across the border from countries where steroids are legal for sale, or they are manufactured by underground (UG) labs from imported raw hormones.

On the other hand, the UG labs import the raw hormones from China, and then manufacture the steroids locally for resale. Hence, the problem main with UG labs is that there is no regulation, so the quality will depend on the particular source. Majority of the time (99%+) the USA based UG labs are ran by very inexperienced guys who sell steroids that aren't even sterile much less prepared correctly.

The popular belief that pharmacy grade steroids are better than UG labs is usually true. As a matter of fact, the products produced by a properly run UG lab will rarely be just as good as pharmacy grade. This is explained by the fact that the cost of the raw hormones from China varies greatly, with certain highly demanded steroids costing up to 15 times more than cheaper steroids. As a consequence, some UG labs will cut expensive hormones with cheaper hormones to reduce production costs and increase profits.

Anavar is a great example - it is roughly 10 times as expensive as winstrol, and both steroids have similar effects in the body. Therefore, an inexperienced steroid user won't be able to tell the difference between the two. So it's not surprising that a lot of UG lab anavar on the black market is mixed with winstrol to reduce the production cost; furthermore, in many cases, it's 100% winstrol (no anavar at all).

Given all of the information above, it is crucial to do your research and read reviews on sources before deciding which source to buy from. A great resource to use is the source reviews section on Evolutionary.org.

As it has already been mentioned earlier on in this article, steroids are illegal without a prescription. Hence, any website claiming to sell legal steroids is a scam (think legalsteroids.com). As a general rule, the products sold on these websites are going to be cheap testosterone boosters with names very similar to those of steroids, which is yet another way to try and trick naive buyers. Though, there are a few guys who relabel their steroids to look like something else (supplements) to get through customs, so take note of your supplier. Furthermore, you cannot legally purchase steroids with a credit card, and any black market steroid source will require Western Union, Bitcoin or Money Gram for the money transfer.

Steroid testing kits have never been proven to work 100%. Many of the kits are sold by unscrupulous drug dealer chemists who create fake compounds that are wrong over 90% of the time. I don't suggest using any steroid testing kits; labmax and Roid Test are all in the same boat. There is no FDA approval of these testing kits and the owners of these places are shady as hell. 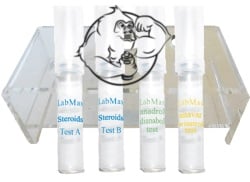 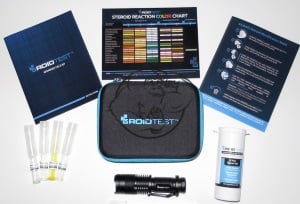 They want you to pay $30 USD for a testing kit on a $40 dollar steroid bottle? Really?! I'm sure as a user you realize this is a total scam. These steroid testing kit places put out the rumors of fake steroids, so they can benefit from newbies being scared, panicking and buying their steroid testing kits. An average newbie user is spending $200 usd on testing kits because he was lied to by these testing places and thinks this will keep him safe. On the contrary, these kits are so inaccurate that they can (and do) mislead the user. In fact, since the kits are mostly fake they always give positive results even when it's a fake steroid.