The World Anti-Doping Agency (WADA) has remarked that former Norwegian cyclist Thor Hushovd has not broken any WADA rules by not telling anyone that Lance Armstrong had admitted doping to him in 2011. 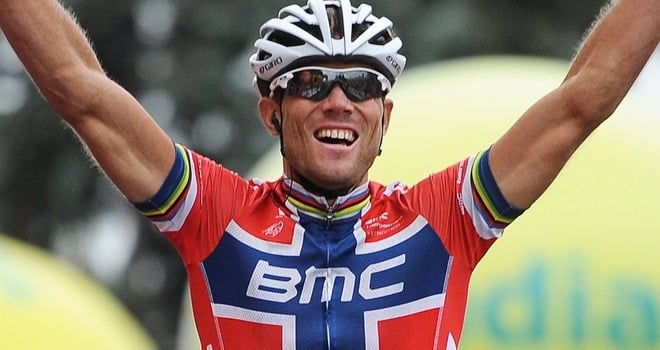 Hushovd is a three-time Norwegian national road race champion (2004, 2010, and 2013) and was the winner of the 2010 World Road Race Championships. Widely considered as the greatest Norwegian cyclist of all time, Thor Hushovd is the first Scandinavian to win the road race in cycling world road championship and the first Norwegian to lead the Tour de France. Before turning professional in 1998, Hushovd won the under-23 time trial world championship and the under-23 versions of Paris–Roubaix and Paris–Tours. Hushovd won stage 2 in a bunch finish at the 2008 Tour de France.

A WADA spokesman said decision of the Norwegian cyclist, who was a former Norwegian professional road bicycle racer riding for BMC Racing Team, not to speak about the doping admission of Armstrong did not violated Article 2.9 of the revised WADA Code that deals with the offence of complicity, which is defined as ‘assisting, encouraging, aiding, abetting, conspiring, covering up or any other type of intentional complicity involving an anti-doping rule violation, attempted anti-doping rule violation or violation of Article 10.12.1 [participating in events while suspended – ed.] by another Person.’

The spokesman said under Article 2.9 of the revised (2015) Code, there is no obligation for an athlete to take the initiative to report doping. The spokesman added a potential infraction rather could include intentionally lying or misleading authorities when it relates to doping and went on to add that there would need to be one of the intentional forms of complicity outlined in Article 2.9 in order for there to be a potential infraction.

In 2012, Hushovd declined to make a comment to website VG.no in 2012 when asked if he believed Lance Armstrong doped. Last Wednesday, Hushovd revealed that Lance had told him in 2011 that he made use of banned drugs while they were spending time together in Hollywood after the Tour of California. Hushovd said Armstrong made the confession before him after he was accused of doping by former teammate Tyler Hamilton. Hushovd now accepts that his subsequent quotes on the doping controversy of Armstrong were misleading as he was aware of the US cyclist's guilt. In his autobiography "Thor", Hushovd said many would probably say he almost defended Lance with his evasive answers and remarked he did not need to judge him. The Norwegian cyclist said he does not have any reason to jump on the wave and crucify Lance because the circumstances and the media expected it.

Hushovd also disclosed another incident in his autobiography. The Norwegian cyclist said he burst into a room without knocking and saw one of his teammates from a former team with a syringe in his arm and five other riders on the bed as spectators. Hushovd added he turned on his heel and walked right back out as it looked really freaky. The cyclist insisted in his book that he never doped.