The world governing body for track and field has announced it is presently assessing evidence and intelligence relating to around 200 Russian athletes gathered by World Anti-Doping Agency investigator Richard McLaren. 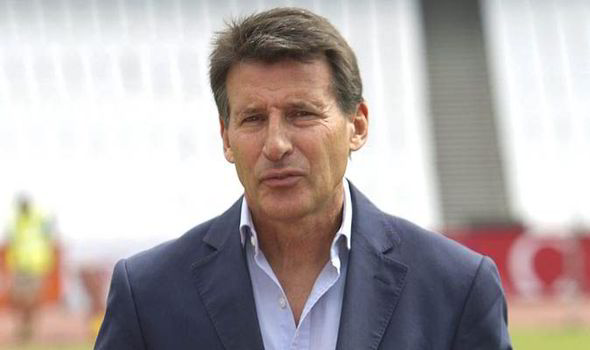 In the second part of his report, McLaren termed the Russian doping scandal as a cover-up that operated on an unprecedented scale. The Canadian lawyer pointed fingers at the Russian ministry of sport, the Russian security services, and the Russian anti-doping agency for creating what he termed an institutional conspiracy across summer, winter, and Paralympic sports. McLaren said his findings might only be the tip of the iceberg. He further commented international sports competitions have unknowingly been hijacked for years by the Russians. McLaren added coaches and athletes have been playing on an uneven field and also said sports fans and spectators have been deceived.

The International Association of Athletics Federations also remarked new guidelines would be shortly provided by it to Russians hoping to compete in a neutral capacity while Russia remains banned from track and field competitions.

IAAF President Sebastian Coe said in a statement that we continue to find ways to create parallel and credible systems of independent testing of Russian athletes so they have alternative avenues to get back in to competition. Coe, chairman of the International Association of Athletics Federation, said Russian athletes have been let down by a system that should have protected them.

A recent report revealed more than 1,000 Russians, including Olympic medalists, benefited from a doping program. Russian athletes were banned by the IAAF from competition in 2015 in response to allegations of state-sponsored doping. The IAAF decided to extend ban on Russia last month that meant the country will miss March's European Indoors in Belgrade, Serbia.

The track and field's world governing body said applications from athletes for neutral status will also be scrutinized using several criteria to prove they are clean. The criteria would include facts such as whether any of their support staff, including medics and coaches, have been implicated in a doping violation and whether they have been any kind of atypical findings in doping samples or concerns about their biological passports that are official records of blood data of athletes. The criteria would also include how often the athlete(s) have been tested in recent years, and whether there are any gaps in their testing history and whether any of their samples in storage are due to be retested.

The IAAF said any "approved" athlete will be officially considered "neutral" for the purposes of competitions rather than Russian. The governing body said athletes would not be required to be necessarily tested outside of Russia that was demanded previously but added the athlete must have been part of a fully-compliant program for a sufficiently long period to provide substantial objective assurance of integrity.

The removal of the demand that athletes must have lived abroad was welcomed by Russian track and field federation president Dmitry Shlyakhtin. The President added up to 50 top Russians could now apply for neutral status but did not elaborated how many of those 50 might fit the guidelines.