The All India Football Federation (AIFF) has announced the country's top goalkeeper Subrata Paul is likely to face a doping ban of four years. 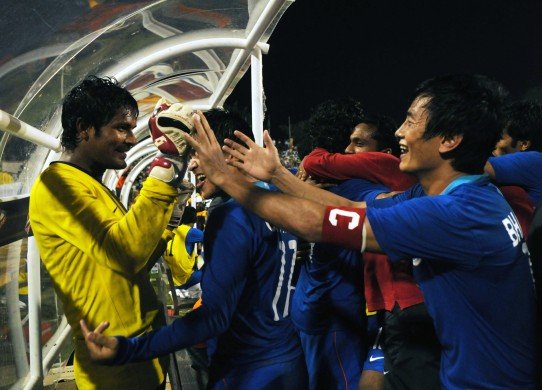 The 30-year-old returned positive for Terbutaline in the tests conducted by National Anti-Doping Agency on his urine sample taken on March 18 during the national camp in Mumbai.

A bronchodilator, Terbutaline is taken when people have trouble breathing or for medical condition such as asthma. It is present in present in commonly-used expectorants administered for cough and cold. However, athletes are required to apply for a therapeutic use exemption if they want to use asthma-related drugs.

It was announced by All India Football Federation general secretary Kushal Das that Paul flunked an out-of-competition test last month. Das remarked the 'A' sample of Subrata Paul has returned positive for a banned substance and he can be banned for four years if his 'B' sample also tests positive. Das went on to add that he is shocked at this development as he thought a player of Paul's stature would fail a dope test.

In a statement, Paul said he will go for the 'B' sample test. The Indian professional footballer who currently plays for DSK Shivajians in the I-League said he is shocked to learn about his positive test. The Arjuna awardee, who made his India debut in 2007 and played for the country 64 times till 2015, said there is no reason for him to cheat and risk tarnishing his reputation. Paul also commented that the AIFF officials, the fans, fellow players, and the media knew that he has been an honest player throughout his career.

Paul went on to comment that he has built up a reputation and he had achieved a lot in his career, for his clubs, and for his country. The goalkeeper added he does not need anything like taking a banned drug to enhance his performance at this point in time of his career. Paul also commented that he has not been provisionally suspended. The goalkeeper said the letter sent by NADA to him only said that it is not a mandatory suspension and he can continue playing and also remarked NADA had asked me to give information on how Terbutaline has gone into his body.

Das however remarked Paul has been suspended. The All India Football Federation general secretary also remarked Subrata can apply for a B sample test as well as simultaneously appeal for the lifting of this provisional suspension. Das said he can play once he appeals for lifting of this provisional suspension but in case the NADA Panel rules against his appeal whatever match he has played after NADA's intimation to us that he has failed his A sample test will be forfeited and his club will be declared to have lost the match.

Considered by many as one of India's finest goalkeepers, Subrata Paul was the number one goalkeeper when Englishman Bob Houghton was at the helm of affairs as India coach and Bhaichung Bhutia as the captain. Paul played a major role in India winning the Nehru Cup international tournament in 2007 and 2009.