Leading Indian shot putter Manpreet Kaur, who won a gold at the Asian Athletics Championships, has tested positive for a banned substance for the second time in a couple of days. 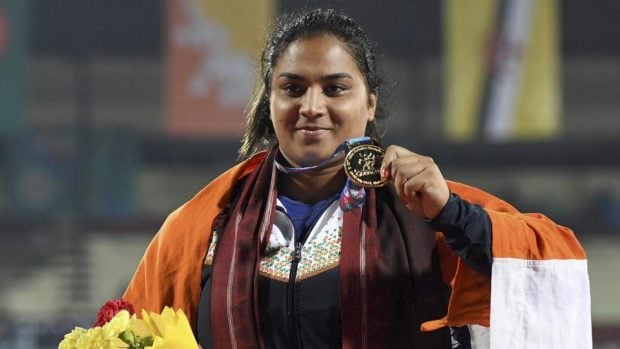 Structurally related to Methylhexanamine, Dimethylbutylamine is a stimulant that was found to have been used by many athletes just before the 2010 Commonwealth Games in New Delhi.

Athletics Federation of India (AFI) president Adille Sumariwalla said Manpreet Kaur has tested positive again for a steroid and the stimulant (Dimethylbutylamine). Sumariwalla also commented the shot putter has been handed provisional suspension by the AFI and has been dropped from the World Championships team. The IAAF World Championships will be held in London from August 5 to 13.

She will now miss the World Championships in London in August after being banned. Manpreet will now appear before a NADA disciplinary panel for a hearing. The national champion might lose the gold medal she won at the Asian meet in Bhubaneswar from July 6-9 if she is not able to prove her innocence.

In April, Manpreet had won the gold medal with a throw of 18.86 meters in the Asian Grand Prix that was better than the 17.75m qualifying mark for the global meet. This outstanding performance also helped her in being ranked World No.1. The 27-year-old had also qualified for the 2016 Rio Olympics but finished a disappointing 23rd with a best throw of 17.06m.

Indian National Anti Doping Agency (NADA) Director-General Navin Agarwal said the agency has not suspended Manpreet as the substance found in her body is not of the nature that would directly benefit a shot-putter. However, Agarwal said she could face a ban of four years if found guilty.

The NADA Director-General added we have provisionally not suspended her because the substance is not of the nature which would directly benefit a shot-putter. Agarwal added the tendency among players to win the medal by hook or crook is what prompts them to take drugs. The NADA Director-General commented that the incentive to do well also has tremendously increased and the rewards for winning have jumped up. Agarwal also added that he will say that one even if doesn’t dope consciously, but factors in the ecosystem lead to an inadvertent doping by athletes like consuming a substance which one doesn’t know like the supplements which people take and some of them may contain a prohibited substance due to which an athlete may land in the doping net.

Indian is third on the list of doping offenders in 2015 after Russia and Italy, according to a report published on the website of the World Anti-Doping Agency (WADA). There were 711 cases of doping among Indian athletes in the period from 2009 to 2016 according to statistics available on the NADA website.