Mauro Santambrogio has been banned for a period of three years by the world governing body of cycling to virtually end his cycling career. Traces of Testosterone were discovered in an out-of-competition urine test taken last October while the Italian rider was serving a ban for an earlier Erythropoietin (EPO) positive. 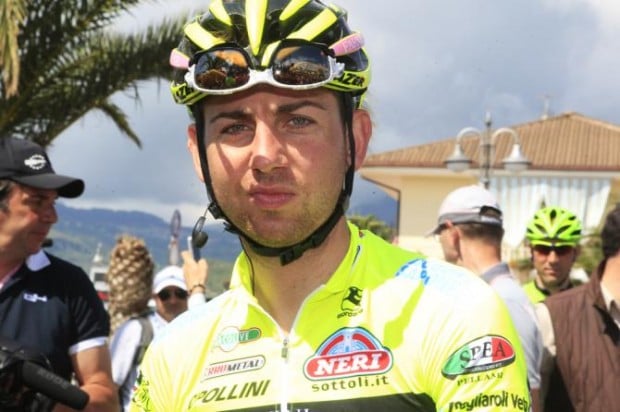 The curly-haired cyclist from the Lake Como zone extended help to the Cycling Independent Reform Commission (CIRC) with a goal to reduce his sentence. He only had to sit out for 18 months until November 2, 2014 instead of serving a doping ban of four years but tested positive for testosterone in an out-of-competition control on October 22.

The cyclist decided not to fight the case and preferred to accept the ban under an Acceptance of Consequences procedure as allowed by article 8.4 of the UCI Anti-Doping regulations. Santambrogio first tested positive during the 2013 Giro d'Italia when he was a part of the Vini Fantini team and won stage 14 and finished the race in ninth place overall. It was announced on June 3 that Santambrogio had tested positive for EPO.

Santambrogio's lawyer Giuseppe Napoleone remarked his client could not have applied for a Therapeutic Use Exemption (TUE) to use the testosterone as he was not a UCI license holder at the time. The cyclist was apparently removed from the UCI and Italian Federation testing pool but anti-doping rules of the UCI allow for the testing of riders during previous established ban for doping. The cyclist made a vague threat to end his life at the end of 2013 but later claimed he got saved because of the support of people via Twitter and the internet. Santambrogio has started training and coaching business in Italy after giving up all hopes to return to the professional peloton.

The cyclist said he respects the UCI sentence but he decided to change his life a long time ago. Santambrogio added he just want to say that he doesn't think the ban is fair because he explained everything at the time and added now he wants to focus on his new life and look to the future. The Italian professional road racing cyclist, who last rode for UCI Continental team Amore & Vita-Selle SMP, also said racing is part of his past and to be clear he wants to say that he had definitely retired from racing and will not be back.

In his defense, Santambrogio claimed that testosterone was prescribed to him as treatment for erectile and fertility problems as he wanted to become a father. Santambrogio explained he went to an urologist on July 7 and he wrote him a prescription for Andriol, 40mg for three months, plus Aprosten for 60 days. Aprosten is used to help prevent prostate problems and Andriol is a brand name for Testosterone. The cyclist also claimed he was not going to train for a comeback at the time but gave his consent to join Amore e Vita in December. His return was stopped abruptly when this case emerged. Santambrogio has been formally banned until October 21, 2017 and his name was added to the official UCI list of riders who have committed Anti-Doping Rule Violations (ADRV).