I have a history question for you.

A loaf of bread cost 7 cents?

A gallon of gas cost 10 cents?

Franklin Roosevelt get elected president of the United States in a landslide over Herbert Hoover?

Hitlers Nazi Party gets the highest % in German elections?

The answer is 1932, which is also the year the current oldest male bodybuilder was born. Yes, you read that right, the man is currently 85 years old as of this article (2017). His name is Jim Arrington, and he started bodybuilding as a teenager back in the 40's a couple years post the end of World War 2. Today, he is still kicking ass and even earned a pro card just a few years ago! 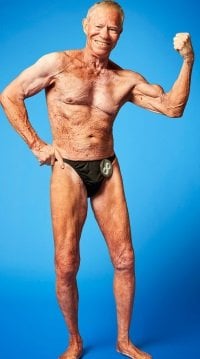 Jim Arrington is the oldest professional bodybuilder in the world, but he had obstacles he had to overcome to become one. Arrington had major asthma problems as a child, and could not play, run, or exercise like other kids. He was so sickly and slim that the neighborhood bullies called him "Skinny Bones". Like many other bodybuilders, his attraction to the sport came when he came across a bodybuilding magazine while at a drug store browsing, at just 13 years old. While his friends were more interested in cartoon books, Arrington was drawn to the muscular physiques in magazines.

Arrington started training at only 110 pounds, and quickly gained 10 pounds of lean muscle within a few months thanks to a $1 training pamphlet he purchased on the street, which taught him basic routines. Two years later, at only 5'8" tall, he would put on even more muscle, weighing over 150 pounds lean. 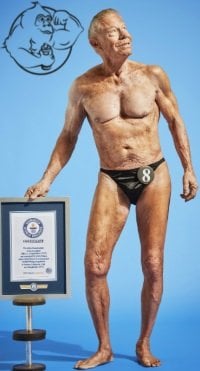 Even with poor genetics Arrington never gave up on bodybuilding. He was living in Venice Beach and was too intimidated by the other physiques to ever dream about actually stepping on a bodybuilding stage. You could say that he was the tortoise vs. the hare. It took him until he was in his mid 40's to finally compete in his first show, 32 years after he first started lifting, and he won the 40+ category for his weight class at the Mr. America 1978 and finished 2nd overall.

Arrington would go on to compete every summer at Muscle Beach competitions and would compete in the Master's division at the national level. He would log over 50 official contests while winning almost 20 of them. Arrington would win his Masters Pro Card at 83 years old, and you can see him in next years 2018 Guinness Book of World Records as the official oldest male bodybuilder.

Arrington is very modest about his training. In an interview, he said he trains his entire body 3 times per week for 1-2 hours a day, and he said that he was inspired to train because he would get picked on as a kid. In addition, he says he was an art major, and to him bodybuilding is his sculpture and life's work. He says he isn't on necessarily a 'strict diet', but he does drink whey protein and keeps an eye on his caloric intake and macros. He considers his diet a lifestyle, and he eats healthy.

You can watch a training video of him here and he blows away most of the people I see daily in the gym: https://www.facebook.com/officialgymmemes/videos/1283123495058220/

His favorite foods are cottage cheese, beef, chicken, and fish. He also says he eats a lot of salad with every meal, believing that the high fiber helps him absorb nutrients.

As for supplements, he says he takes amino acids and 'things like that'. 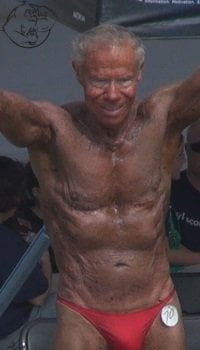 When asked what his goals are in his 80's, he says most people his age are just trying to 'hold on' but he believes in really asking "how can I reach my potential?" In conclusion, he gives advice to new bodybuilders as simply "just show up and experiment to do what works best for them".

You can see more of his interview here:

Arrington was competing back on Labor Day of 2014 at a ripe 82 years old at Muscle Beach, you can see his short interview here:

Here is a bicep workout:

His arms look bigger and ripped than most guys at the gym!

Rich Piana called Arrington "a beast" in this video:

Piana lauded Arrington for his training style of a lot of drop sets and volume which he called 'a challenge'. They got in a workout together in this short video. Ironically, Arrington has outlived Piana by almost 40 years!

Arrington is likely on testosterone replacement therapy (TRT), which means he takes 150-200mg's of testosterone a week for the remainder of his life. It would not surprise me if he also blasts some very small amounts of Primobolan and mild steroids. A blast for him would look like this:

*200mg of Testosterone Cypionate per week

*200mg of Equipoise per week

Join the Evolutionary.org forums and have your say on Jim Arrington's Steroid Cycle!

*DISCLAIMER: The cycle above is our opinion on what Jim Arrington could have used, this is for information and entertainment purposes only. There is no direct evidence that Jim Arrington used steroids or any other drugs.