UFC light heavyweight champion Jon Jones has failed a drug test for an anabolic steroid. The UFC announced Jones (23-1 MMA, 17-1 UFC) was notified by the United States Anti-Doping Agency of a potential doping violation in a statement on its website. 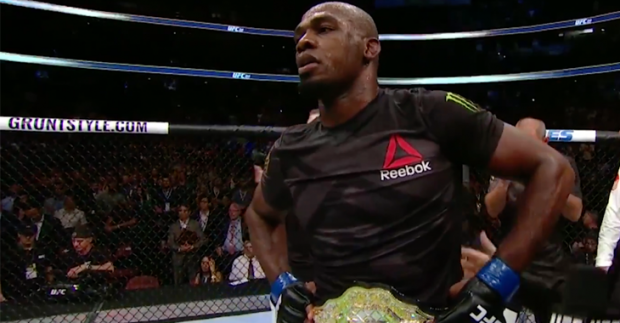 The UFC noted that the violation came from an in-competition sample following weigh-ins for his bout against Daniel Cormier (19-2 MMA, 8-2 UFC) at UFC 214, where Jones recaptured the belt via third-round knockout.

Jones tested positive for the steroid Turinabol, which is an anabolic agent famously linked to the state-sponsored doping program involving athletes from East Germany in the 1970s and 1980s.

This positive test is the second positive of Jones for anabolic steroids and the third overall failed drug test. Jones also tested positive for a steroid following UFC 200 and was stripped of the interim belt prior to a scheduled title unifier against Cormier. Jones tested positive for cocaine out of competition following his first win over Cormier at UFC 182 and was fined by the UFC for violating the promotion’s code of conduct. The UFC fighter faced a ban of one year for his first positive steroid test after it was ruled by a USADA arbitrator that Jones did not intentionally dope but was negligent in taking a sexual enhancement pill prior to UFC 200.

Jones is not news to controversies. In April 2015, Jones was involved in a negligent in taking a sexual enhancement pill prior to UFC 200. This prompted the UFC to strip him of the light heavyweight title. Jones later pleaded guilty and received probation in exchange for giving speaking appearances.

Jones now faces a possible ban of four years for his second USADA offense, which is likely to end his career.

Widely considered the top pound-for-pound fighter in his sport, Jones last month emphatically denied he has ever used performance-enhancing drugs. He is now likely to be stripped of his light heavyweight title for a second time if the doping violation is confirmed.

UFC President Dana White said Cormier held the belt for most of the absence of Jones and he will likely be the champion again. White said Jon and he have been mad at each other since UFC 200, but the reality is we have been here for this kid every step of the way.

Malki Kawa, the manager of Jones and his camp, released a statement saying that we are all at a complete loss for words right now. Jon, his trainers, his nutritionists and his entire camp have worked tirelessly and meticulously the past 12 months to avoid this exact situation. The statement further reads we are having the samples tested again to determine the validity or source of contamination and added Jon is crushed by this news and we are doing whatever we can as a team, to support him.

Cormier said in a statement that he was "disappointed" and "very emotional" about the news. Cormier, who is on vacation in Hawaii with his family, remarked he thought Jon Jones was the better man that day and also commented that he cannot believe we are going through all of this again.