Jon Jones in trouble once again for using steroids...

Jon Jones is among the top 3 most popular MMA fighters, so he regularly draws a lot of attention to his fights. Yesterday Jones has drawn attention out of the octagon, as it was announced that he had tested positive for the oral anabolic steroid Turinabol. In fact, Jones has had prior violations, and now he faces a potential serious suspension. 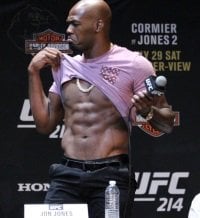 Jonathan Dwight Jones was born in upstate New York in 1987, he currently resides in Ithaca, NY, and his training takes place in New Mexico. Interestingly, he sports two very exotic nicknames: "Bones" and "Sexual Chocolate." Jon is 6'4" and 205 pounds with an 84.5 Inch reach. So far, he has compiled an amazing record of 23-1 (with 10 wins by knockout).

Jones started out as one of the top high school wrestlers and state champions in New York. In addition to that, he also played football, where he earned the nickname "Bones" because of his lean frame. After high school, he briefly attended college, where he studied Criminal Justice and dropped out to focus solely on MMA. He quickly gained respect going 6-0 and easily finishing off his opponents, so in 2008 he was offered to step in as a replacement by the UFC.

His first UFC fight was at UFC 94 vs. Stephan Bonnar, where he won by unanimous decision. Further on came more victories, and the UFC signed a new four-fight contract with Jones. What is really impressive, is that his only loss took place when he was disqualified for two 12-6 elbow hits, which dislocated the shoulder of his opponent and broke his nose.

However, he would win the rest of his fights, including in 2011 at UFC 128. In that fight, he beat Mauricio Rua by TKO and became the youngest Light Heavyweight UFC champion ever. Experts agreed that Jones dominated this fight the entire time, and the final blow to his opponent's head caused the referee to stop the fight.

In 2013, Jones was involved in an instant classic fight with Alexander Gustafsson, where Jones would win after grueling 3 rounds by unanimous decision, and both fighters ended up in a hospital. As a result, it was called easily the best fight of the year, and possibly the best fight in UFC history.

Although Jones is one of the most successful and popular MMA fighters of all times, he has had numerous off-the-ring problems, which have hurt his image. For instance, in 2012, Jones drove his Bentley car into a pole in New York, was arrested for drunk driving, and got his license suspended for 6 months.

Later that year in September, Jones refused to fight a last minute replacement, causing the fight to be canceled for the first time in UFC history. Dana White, the president of UFC, said the act was selfish and cost the other fighters and fans a lot of time and money.

Three years later, in early 2015, Jones failed a cocaine test and admitted he had made a mistake but insisted he wasn't a coke addict. That same year, Jones was involved in a hit and run incident, in which he had fled the scene just to turn himself in the next day. This led him to get suspended and his title stripped by the UFC temporarily.

Moreover, in 2016 Jones' urine sample showed traces of Clomid and Letrozole. Clomid is a SERM used by bodybuilders during post cycle therapy, while letrozole is an aromatase inhibitor used to disable the estrogen enzyme to prevent water retention, especially with those using anabolic steroids. Jones claimed that he had taken a contaminated product he thought was an anti-impotence drug. This incident resulted in a one-year suspension.

Jones once again appears to be in hot water after his championship win over Daniel Cormier at UFC 214 last month. An in-competition sample was collected on his weigh-in day on July 28, and his fight was the next day.

The sample showed that Jones had used the oral anabolic steroid Turinabol (Tbol). This steroid was originally developed and used by the East German Olympic team during the 1960's to give them an edge with performance. It is a very mild and dry compound used during cutting steroid cycles to prevent muscle wasting, especially while in a caloric deficit. You can read more about Tbol here. 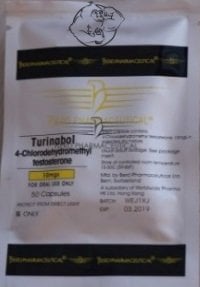 According to the story, Dana White was upset about the findings and commented "I always know what to say. I don't know what to say about this one, unbelievable." Nonetheless, Jones' team commented, "Jon is crushed by this news, and we are doing whatever we can as a team to support him."

According to UFC rules, this violation could end his career as he should be facing 2 or 3 years of suspension. What's more, his win over Cormier would be changed from a win to a no-contest. Interestingly, Cormier took a classy position saying he would like to get more evidence before making a statement, and said he was very emotional about hearing the news. He admitted that Jones "was the better man that day - I competed and lost."

Jones is entitled to due process, and he must wait for the Commission to work with the USADA to get all the proper information. Jones can also request his B-sample to be tested to confirm the failed test, and he can also appeal the ruling.

Ironically, Jones had said before his fight with Cormier that quote "Steroids is (are) something I've never done and I despise the use of PED's most" and that "calling me a steroid user is one of the most insulting things you can do to a guy like me."

Want to discuss Jon Jones on our forums? click here and discuss him...