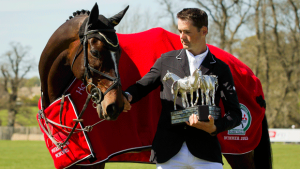 It was revealed by FEI that Jonathan Paget asked the equestrian sport's world governing body to disqualify him. Olympic medalist Andrew Nicholson received the title in his place and ultimately, the Rolex Grand Slam. In its ruling, the FEI Tribunal said a ruling on the automatic disqualification from the event in advance of a full hearing was of importance for the reputation and integrity of the sport, and in order to gain clarity over the winner of the event in advance of the Mitsubishi Motors Badminton Horse Trials, scheduled to commence on 7 May 2014.

Equestrian Sports New Zealand (ESNZ) stated on their website that Paget is aware that the ongoing uncertainty with regard to the Burghley title is having a detrimental effect on the sport of eventing and especially the buildup to the first two major events of the Northern Hemisphere season, this weekend’s Rolex Kentucky Three Day Event and the Mitsubishi Motors Badminton Horse Trials (May 8-11). Paget insisted that he is not at fault and added he was not aware that 14-year-old Clifton Promise had received the prohibited tranquilizer reserpine. He however acknowledged that the substance was found in the horse’s two blood samples taken September 8 at Burghley, according to the tribunal's decision.

Equestrian Sports New Zealand (ESNZ) welcomed the ruling and revealed that Paget and all relevant parties state categorically that none of them have taken any actions with the intent of administering any prohibited substance. Paget submitted evidence that explained and supported his claim of "no fault and no negligence" in January. ESNZ insisted that Paget is clear that all presently available evidence shows that neither he nor anyone else knew of the presence of the banned substance, before the sample was taken.

In October 2013, Paget, who won Olympic bronze at London 2012 as part of the New Zealand eventing team, was suspended from all national and international competitions. At that time, ESNZ remarked ESNZ and Paget are establishing a likely cause of the positive test and will provide submissions to the FEI Tribunal as required. Paget remarked then that we are looking at everything and trying to find out just how this has happened and added there has been obviously been some sort of mistake, but he had got no idea at this stage.

Paget faces a two-year suspension from all international competitions and a fine, according to FEI representatives. The Tribunal ruled that Clifton and Paget are disqualified from their placing at Burghley. It added that all points and prize money won at the event by the horse must be forfeited. Rider rankings and FEI standings have been amended as a result of this decision. The full hearing of the Clifton Promise case is scheduled for 3rd June.