On September 15, we learned that due to late registration Kai Greene will not be participating in the 2015 Mr Olympia contest.

What is the Mr. Olympia?
Mr. Olympia is the title given by the IFBB (International Federation of Bodybuilding and Fitness) to the winner of the men's bodybuilding contest at Joe Weider's Olympia Fitness and Performance weekend. Interestingly, this contest started in 1965. Among the winners of the Mr. Olympia contest, Lee Haney and Ronnie Coleman hold the record for most wins with 8 each, and Arnold Schwarznegger had a string of wins in the 1970's, which helped launch his acting career. Currently, Phil Heath is the reigning champion since 2011.

Who is Kai Greene?
Kai Greene is an American IFBB pro bodybuilder with an impressive record, which includes such achievements as being the runner up at multiple Mr. Olympia's, the winner at the 2009 and 2013 EVL's Prague Pro, and 2010 Arnold Classic champion. 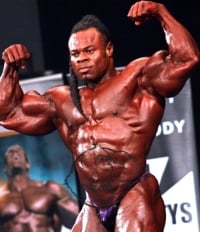 He was born in 1975 in Brooklyn (New York), and he did not have an easy time growing up as he was raised in foster care. What's more, he had problems in school with his behavior. However, Kai managed to overcome all that, and he was introduced to bodybuilding as a teenager, where he quickly realized he had a gift. In fact, after taking a 5 year break he came back and became qualified as a pro IFBB bodybuilder, and in his mid 20's he won at the NPC Team Universe contest.

Video released online
Kai Greene released a teary eyed video to his fans on social media, breaking the news that he has 'come to the realization' that he would not be able to compete. According to him, there were problems 'behind the scenes' that he would not disclose. Furthermore, in the video Kai was discussing that he has 'invested' the past 20 years of his life in the 'belief and idea' to come to the Olympia, and do his 'absolute best.'

As he said, "You do not get to this point, and just stop.... it doesn't happen like that... I'm not a victim and they aren't going to break me." He refused to give any names, or speak negatively about any person. Then, he broke down in tears and said, "it's not fair, and you should always aim to reach your goals, and if it means you have to 'expand your vision and not be afraid to' then you should go for it.”
Kai Greene said, “what makes a person a champion isn't the trophies, but it is rather to be your best, because it is your responsibility to do so.” He then dropped the bombshell news that he would not be competing in Mr. Olympia 2015, but he still encourages everyone to support 'the sport,' and that he would not be at the expo because he was not 'allowed to.'

He finished his video by saying that he was not broken, and will continue to 'aim to do great things,' and anyone who was competing this season should do it with a 'pure heart and a healthy mind.'

The Truth
According to early rumors and logic, what appears to have happened here is a classic example of the bad side of bodybuilding, which is money and sponsorships.

Unlike most sports that can be seen on tv and radio advertising, bodybuilding is very much dependent on sponsors and contractual agreements. Admit it, you rarely see a bodybuilding contest on television or broadcasted on the radio of course.

Kai Greene had planned on launching his Dynamik Muscle supplement line at the same time with the Olympia, so it would get maximum exposure. Most likely, his agent might have requested a large booth space, and free title sponsorship among other perks, whilst the Olympia representatives would have countered with another deal. As a result, this gamble appears to have not gone the way Kai would have wanted, and American Media Inc (which owns such magazines as Flex, Muscle and Fitness, Natural Health and has 18 digital sites) appears to have 'out muscled' Kai, and because no fees were paid on time, he will not be able to participate in the biggest bodybuilding event of the year.
Perhaps, this was Kai's plan all along - not compete, but rather create some off the stage drama, to get more interest in his supplement line? In the coming days we will learn more about this situation, but one thing we do know is that Kai Green once again, will not be Mr. Olymipa 2015.