American actress Kate Hudson has expressed shock over the doping scandals of former boyfriends Lance Armstrong and Alex Rodriguez. Kate remarked she was as shocked as anyone after learning about that her ex-boyfriends were embroiled in scandals involving performance enhancing drugs. 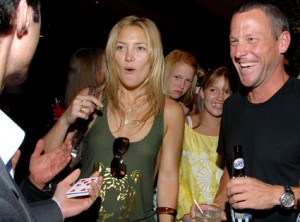 The 35-year-old actress said she personally thinks that you make the choices you make and you should reap the consequences. Hudson dated Armstrong for a few months in 2008 after she split with her ex-husband, Black Keys musician Chris Robinson. She then endured a shorter relationship with actor Owen Wilson and became a regular visitor in the Yankee Stadium stands as she was linked to Alex Rodriguez, the three-time MVP and suspended Yankees third baseman. Hudson remarked Lance and Alex are phenomenal athletes who have made some bad choices and let a lot of people down and added people have a right to feel betrayed.

Lance Armstrong was banned by the United States Anti-Doping Agency for using banned performance enhancing drugs. He later admitted to making use of Testosterone, Cortisone, and blood transfusions to win the Tour de France a record seven consecutive times. Rodriguez admitted to using performance-enhancing drugs in 2009 and was recently suspended by Major League Baseball for the entire 2014 season for his ties to Biogenesis, the Miami clinic dealing in banned drugs.

In "Wheelmen: Lance Armstrong, the Tour de France and the Greatest Sports Conspiracy Ever," by Wall Street Journal reporters Reed Albergotti and Vanessa O’Connell reported that Armstrong's ex-girlfriend, Sheryl Crow, reportedly witnessed his cheating. The authors reported that Armstrong was completely open about it rather than try to hide the transfusion from her and added that Armstrong trusted that Crow would have no desire to tell the press or anyone else about the team’s doping program and Lance explained that it was simply part of the sport -- that all cyclists were doing the same thing.

Sheryl Crow was interviewed as part of the doping investigation in 2011 according to the New York Daily News. She was contacted by investigators as a grand jury considered a federal indictment against Lance Armstrong. It was reported that Sheryl allegedly traveled to Belgium with Lance Armstrong on his private jet in 2004 and watched the cyclist receive a blood transfusion. Food and Drug Administration criminal investigator Jeff Novitzky provided immunity to Crow in exchange for her cooperation and the singer allegedly told him about the transfusion three years ago. Novitzky gave Crow a proffer agreement, a document that protects witnesses from criminal prosecution if they cooperate honestly. The singer and cyclist were briefly engaged, but they split up in 2006.