Kevin Levrone is one of the most popular and successful bodybuilders of his era. His competition stats are 5'10" 250 pounds, with a 60" chest, 29" waist, and 20" calves. He was born in 1964, and is still in great shape for his age; in fact, he made a comeback in 2016 to prove that 'old guys' can still kick ass, finishing a very impressive 16th place at Mr. Olympia. Not bad for a guy in his early 50's! He is nicknamed the Maryland Muscle Machine. 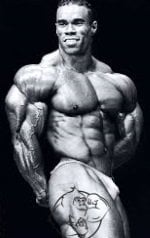 Levrone was born and raised in one of the roughest cities in America, Baltimore. He lost his Italian father at a young age to cancer, and was raised by his black mother, along with his 5 other siblings. He admitted that losing family to cancer took its toll on him, and he turned to lifting weights to distract him from lives tough breaks. He also watched his cousin transform after his military training from out of shape to ripped and disciplined. These events gave him an outlet, and made him obsess over nutrition. He didn't want to end up dying young too, and he wanted to be more of a beast than his cousin was.

Even though he competed as an amateur in his early years, Levrone's professional career started in his mid 20's in 1991. He won his first NPC show, and then would win Grand Prix Germany, and the Night of Champions competition. It appeared Levrone was on his way to becoming a serious Mr. Olympia threat, and in 1992, he took down 2nd place, behind Dorian Yates.

Levrone suffered a major pectoral injury after Mr. Olympia while benching 580 pounds, and would require 3 surgeries to repair it and had to deal with an infection on top of that. This was a setback, but it didn't stop him from coming right back the next year and winning the 1993 Germany Grand Prix.

Levrone would go back to dominating bodybuilding, winning or coming in the top 3 in the biggest bodybuilding shows of the 90's. His consistency was very impressive, but he also came short of ever winning Mr. Olympia, even though he competed in more than a dozen of them. 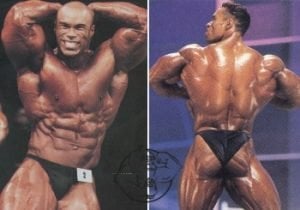 Levrone retired from professional bodybuilding after 2003 and did some acting and played sports. As mentioned above, in 2016, he came back for 1 last Mr. Olympia push, finishing in 16th place.

Currently, he has a supplement line and a training program.

His most popular videos on youtube are a Kevin Levrone tribute:

And one of him at 53 posing and training which is very inspirational:

Levrone believes in changing up his workout routine frequently. One thing though, he keeps constant in working out specific muscle groups different days. An example of that would be working out all his pulling muscles on Monday, and then his pushing muscles on Tuesday, instead of mixing them up the same day. When it comes to bodybuilding, he believes in squeezing and locking out, utilizing contraction.

Levrone is also a big fan of heavy, lows reps, and high volume. However, he says that just because it works for him, it doesn't mean it will work for everyone else.

A typical bicep and tricep routine for Levrone is 16 reps of each in the 6-8 rep range.

Levrone was influenced to eat very healthily after watching his father die of cancer too young. He is very much against cheat meals or any sort of junk food. In addition, he is against bulking and cutting; instead, he believes in consistency year round. This tactic may explain why he was so consistent his whole career. 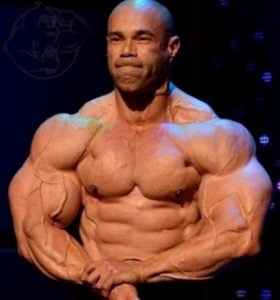 He is not a fan of red meat, instead opting for fish and little chicken. In addition, he eats a ton of vegetables.

Overall, his mentality with food is whole foods, unprocessed, and zero junk.

Levrone says that genetics are 90% of bodybuilding, you can watch him here:

In addition, he says that he is against young guys using steroids. However, this does not mean he isn't using steroids to enhance his results.

This is a speculation of what he used for his Mr. Olympia comeback.

Join the Evolutionary.org forums and have your say on Kevin Levrone! 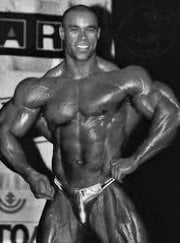 *DISCLAIMER: The cycle above is our opinion on what Kevin Levrone could have used, this is for information and entertainment purposes only. There is no proof Kevin Levrone used steroids or any drugs. All information expressed is per 1st amendment rights.