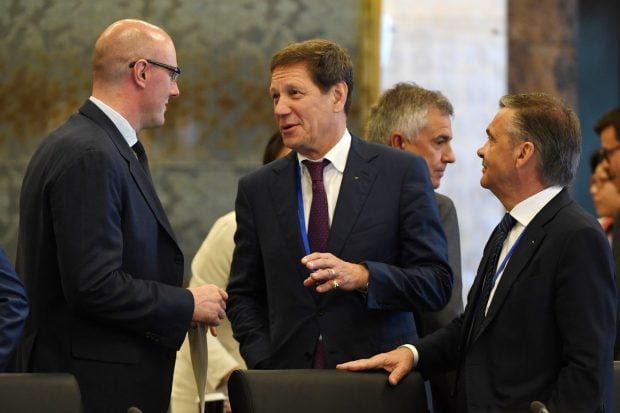 Dmitry Chernyshenko, who remains on the IOC Coordination Commission for Beijing 2022 and headed the Organizing Committee for Sochi 2014, remarked the Kontinental Hockey League is ready to respond accordingly if the IOC decides otherwise. An influential figure in Russia, Chernyshenko is also chairman of Gazprom-Media, the largest media holding company.

The Kontinental Hockey League, a 27-team professional league, is regarded as the second strongest in the world after the NHL. Twenty-one of the teams are from Russia and one team is each from Belarus, China, Finland, Kazakhstan, Latvia, and Slovakia. More KHL players are expected to feature in Pyeongchang than ever before because of the absence of the NHL for the first time since their inaugural appearance at Nagano 1998. This was likely to include from teams like United States, Sweden, Canada, Czech Republic, and Russia.

Chernyshenko said Russian President Vladimir Putin has stressed at a recent meeting of the Valdai Discussion Club that the IOC is forcing the country to either participate under a neutral flag or to not participate in the Olympic Games at all. The Kontinental Hockey League President remarked any of these two outcomes will no doubt negatively impact the Olympic Movement. Chernyshenko added KHL since its founding days follows the rules of the IIHF and WADA and does not tolerate doping but added it is hard to understand the reason behind decision of the IOC to remove athletes on the reports of informers and commissions, but not the real facts confirming the use of doping.

The KHL President said the International Olympic Committee was unable to agree with the NHL on its participation in the Games. Chernyshenko added KHL is not controlled by either IIHF or WADA and also commented that it also seems that the participation of the North American League in the Olympics depends only on their own wishes, and not on the success of the negotiations.

Media reports have suggested that the Kontinental Hockey League is planning to scrap a planned break in their season from January 29 to February 25. This will coincide with the Olympics and the move will happen if Russian athletes are made to compete neutrally at Pyeongchang 2018. Scrapping of the planned break would mean players from across the globe who compete in the KHL could then not be released to participate.

Rene Fasel, the International Ice Hockey Federation (IIHF) President, also described the "nightmarish" prospect of Russia being absent from the Pyeongchang Games. Fasel also remarked that a KHL withdrawal is prohibited under the IIHF rules they have signed up to.

The IOC will deliver its verdict on the participation of Russia at the Pyeongchang Games at an Executive Board meeting scheduled for December 5 to 7. This will be after findings of two IOC investigations into possible doping and sample tampering at Sochi 2014 are put before it. The IOC is likely to "assist" Russia with an option for neutral participation.