"The gym is my sanctuary..." - NFL safety Laron Landry

That is a direct quote from former NFL safety Laron Landry, who is considered to be one of the most freakish professional athletes of the last 10 years. To put it mildly, the man was simply born for bodybuilding, and athletics in general. In fact, his arms have been called 'unnatural' by his peers, and he has teased fans with “selfies” at the gym showing off his physique and strength, as well as a very rigorous workout routine. Interestingly, Laron was a talented athlete from a very young age, and he was ranked in the top 5 of talented high school athletes in the entire USA. Few people know that, but his brother played in the NFL as well.

Landry played at Louisiana State University for college guru's Nick Saban and Les Miles, starting in 48 straight games, where he compiled 315 tackles and 12 interceptions, which ranked him high in the school's history. Therefore, even as a freshman, it was obvious that he was a gifted football player. What's more, he was a smart young man in the classroom as well, as he made the SEC Academic Honor Roll.

Before entering the NFL after college, he participated in the NFL Combine, and posted godly statistics: he ran the 40 yard dash in 4.35 seconds, and had a 38 inch vertical jump. Hence, Laron was seen as one of the top prospects, and was the 7th player drafted overall, which is impressive for a safety.

Regarding his physique, he was 6 feet and 213 pounds before entering the NFL. However, once he started competing in the NFL, Laundry reached his top weight of 230 ripped solid pounds.

When entering the NFL, Laron Landry signed a $42M contract with Washington, and he was named a starter right from the beginning. This is not surprising, since he had an immediate reputation for scaring with jarring hits those receivers who dared to go in his location on the field. As a result, Laron finished his rookie year starting every game and posting almost 100 tackles. Furthermore, he was named a pro bowl alternate, which is an impressive feat for any rookie.

Landry would play with Washington from 2007 to 2011. However, his last season with this team was a disaster, as he suffered from hamstring and groin injuries. Additionally, he had a disagreement with the team management after refusing to undergo a surgery, and choosing to use alternative medicine instead. Hence, they parted ways, and Landry headed to the Jets, where he had a strong season. Indeed, as part of the Jets, Laron earned his first pro bowl appearance, set career highs in tackles, and broke personal records in forced fumbles. He then signed a $24M contract with the Colts, and had a solid 2013 season. 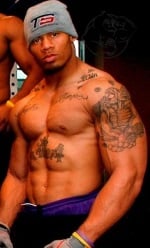 Landry's suspension woes began in 2014, as he was caught using performance enhancing drugs, leading to a 4 games suspension. After the Colts released him, he failed yet another test, which meant he would be suspended for additional 10 games the next season. Nevertheless, the news got worse, as Laron failed a 3rd time while being a free agent, so he got an indefinite ban of at least 2 years.

Speculation on what he used

There is no direct evidence of this, but based on speculation we can take an educated guess.

The media noted in 2014, that Landry's offseason workout schedule looked more like a bodybuilder's program, rather than an NFL athlete. As a matter of fact, his NFL roommates from the Jets would even joke, saying that Landry trains "23 hours a day".

These jokes make sense, since during the season, when most players were resting on their days off, Landry's workout consisted of: 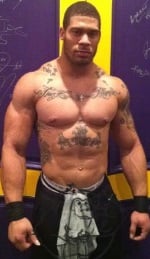 Probably, if he did not have to play football matches, Laron would workout on Sundays too. Besides, Landry has posted a famous "arm assault" workout, which consists of an arm day made up of 30 sets of exercises, and also a very rigorous "German volume shoulders" workout. Therefore, it is obvious that Landry does not believe in overtraining, or taking days off.

Based on all of the above mentioned information, we can speculate that he was taking massive doses of human growth hormone (HGH), and he was likely busted for compounds like trenbolone, testosterone, and winstrol. These would be the most logical steroids to use due to the fact that his game was made up of power, power, and more explosive power.

All in all, my opinion is that his sheer amount of workout volume would make it impossible to recover without the help of performance enhancing drugs and incredible genetics.

Want to read about your Laron Landry Steroid use on our forums? check out these threads:

*DISCLAIMER: The above information is for entertainment purposes only. There is no proof Laron Landry used steroids or HGH. All information expressed is per 1st amendment rights, this article is in compliance with all legal articles of free speech.