Former Boston Marathon winner Lidiya Grigoryeva has been banned by the world governing body of athletics (IAAF) for a period of two and a half years. 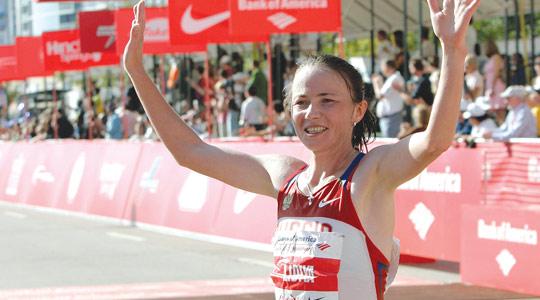 The 42-year-old Grigoryeva, who won the Boston Marathon in 2007 and the Chicago Marathon in 2008 was banned after suspicious blood values were found in her biological passport. Grigoryeva, a Russian citizen, does not lose any major titles or medals. Grigoryeva was also a European bronze medalist in the 10,000 meters in 2006. Grigoryeva claimed the 2007 Boston Marathon title in 2hours 29min 18sec before triumphing in Chicago in [2:27:17] the following year. She also claimed marathon titles in 2005 in Paris and in 2006 in Los Angeles. The Russian long-distance runner from the Chuvashia region won the Bronze medal over 10,000 meters at the 2006 European Championships in Athletics in Gothenburg in a time of [30:32].72 minutes.

The Russian marathon runner will be ineligible from February 16, 2016 until August 15 in 2018 and will only be stripped of results achieved between April 17, 2009 and May 14, 2010. This means both her Boston and Chicago victories will remain in the record books.

It comes after her fellow marathon runner Liliya Shobukhova was banned from athletics and stripped of her win at the 2010 London Marathon and victories at the Chicago Marathon in 2009, 2010 and 2011 after "abnormal hematological curves" were shown by her biological passport. Liliya was the first male or female athlete to ever achieve a hat-trick of Chicago wins. She was asked to repay her prize money, pending an appeal. The highlight of Liliya's career came in the year 2006 when she conquered the 3,000m World Indoor Championships crown in Moscow and the 5,000m European Champions title in Gothenburg. Shobukhova was the second fastest female athlete in history over 26.2 miles behind Paula Radcliffe until she was banned in 2014.

Liliya later assisted the IAAF to uncover doping and corruption practices after it emerged in a leading daily that senior athletics officials extorted €450,000 (£330,000) from her to cover up her doping violations. Gabriel Dollé, the most senior anti-doping official at athletics’ governing body until last year, and Papa Massata Diack, the son of the former IAAF president Lamine Diack received suspensions.

The world governing body of athletics also announced a doping ban of two and a half years on another Russian distance runner Alyona Kudashkina who is reportedly a former pupil of Viktor Chegin, a coach linked to more than 25 doping cases. Kudashkina registered an adverse biological passport finding. Russian middle-distance runner Larisa Kleimenova was given a ban of four years after testing positive at last year’s Russian relay championships.

Moroccan middle-distance runner Amine Laalou was banned for eight years for his second doping offense after failing an out-of-competition test in Morocco in April. The 34-year-old Laalou was a silver medalist at the 2010 African championships in the 1,500 meters. The Moroccan middle-distance runner previously served a ban of two years between 2012-14 after testing positive for the diuretic and masking agent, Furosemide.