Better known as Kimbo Slice, Kevin Ferguson was born on Feb 8, 1974 in Nassau, Bahamas. As he was growing up, Kevin's nickname was simply "Kimbo," and only in his late 20's it became Kimbo Slice. When he was a child, his mother and 2 brothers moved to the Miami area, where he would have his first fight at an age of 13 years while defending a friend.

During his high school years Kevin was a star linebacker; later, he would use his athletic talents to land a college scholarship at the University of Miami.

Unfortunately, he had to deal with adversity late in his teens when Hurricane Andrew destroyed his home, and he had to live in his old Nissan for a month. 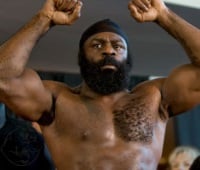 Few people know this, but Kimbo worked as a limo driver and bodyguard for a pornography company in Miami. In addition to that, in his late 20's he started engaging in unsanctioned street fights. In fact, some of these fights can be still seen on social media sites like youtube and sublime.

Out of all his street fights, Kimbo lost only 1 on tape, and that was to Sean Gannon - a Boston cop, who is now a UFC veteran (you can watch the fight here - https://www.youtube.com/watch?v=NhNJ2qAQf1cIt). It was precisely in one of these fights when he sliced an opponent's face near the eye, which resulted in his famous nickname of "Kimbo Slice."

In 2005, Kimbo got into MMA training, and his first exhibition fight was against Ray Mercer, in Atlantic City. In this fight, he defeated Mercer at [1:12] into the 1st round with a guillotine choke. His second exhibition fight against Roy Nelson took place in Las Vegas, where he lost in the 2nd round.

In October of 2007, ProElite announced that they had signed Kimbo to a deal, and he would fight that same fall. His first ProElite fight was against Bo Cantrell, which he won in 19 seconds by submission due to strikes. The next February he fought Tank Abbott, who had accepted a challenge after his first exhibition fight, as he had been in attendance. In spite of the fact that Kimbo would weigh in at only 234 pounds vs. the 280 pounds from his street fight days, he would easily win against Tank in 43 seconds by KO. All in all, Kimbo would go on to post an official 5-2-1 record in the ProElite league.

Afterwards, in the first ever MMA event shown on prime time network TV he beat James Thompson in the 3rd round in May of 2008. Although critics were not happy about Kimbo's technique in the fight, he ended up winning when the referee stopped the fight due to repeated punches to an injured Thompson. This is the reason why Frank Mir was quoted saying "every time Kimbo Slice fights, it sets MMA back."

His next fight was supposed to take place against Ken Shamrock in October of 2008, in Sunrise, FL. However, after Ken Shamrock cut himself during a warm-up, his replacement Seth Petruzelli stepped in and defeated Kimbo in just 14 seconds. Interestingly, Petruzelli would tell a radio station that promoters ordered him not to use certain moves in order to protect the new internet star.

As a consequence of the loss, EliteXC would go bankrupt after this match, and Kimbo would move on to UFC, where Dana White required him to win his way in. For this purpose, White created a show called "The Ultimate Fighter: Heavyweights," and Kimbo's first unofficial fight would be a loss to Roy Nelson in the 2nd round. Yet, he would go on to beat Houston Alexander, in Las Vegas on December 5, 2009, in an unanimous 3 round decision.

Kevin's final official UFC fight would be a loss to Matt Mitrione in the 2nd round by TKO. This took place on May 8, 2010 in Montreal, Canada. As a consequence, UFC released him the next day, and he would not fight again in MMA for almost 5 years, choosing to box instead. 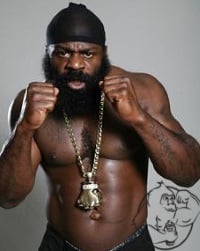 Kimbo got into boxing in-between his MMA career, from 2011 to 2013, and he won all 7 fights (6 of them by knockouts). However, we have to admit that his opponents in these fights was not the best.

His matches in order were against:

In 2011, Kimbo was set to go against a Japanese Sumo wrestler named Shinichi Suzukawa, in Japan. Nonetheless, Kimbo was injured during practice, and consequently did not go through with the encounter.

After his boxing career, Bellator MMA signed Kimbo to a multi fight deal. He beat Ken Shamrock by TKO in June of 2015 in St. Louis, MO. Nonetheless, some think the fight was rigged, as it looked like a pro-wrestling match rather than a real fight.

In February of 2016 Slice faced Dada 5000 - an old rival from his street fighting days. Kimbo would knock out Dada in the 3rd round. Unfortunately, it was revealed that Kimbo had failed a steroid test, being caught with Nandrolone (deca durabolin or NPP). As a result, he was fined, his license was revoked, and they took away his victory. Yet, this fight garnered a record 2.5M viewing households, and his next fight was announced for July 2016 in London.

Kimbo has credits in five D-rate movies, including a Nickelodeon movie called Merry Christmas Drake & Josh, and The Scorpion King 3.

On June 6, 2016 Kimbo died of heart failure. In addition, it was discovered that he had a mass on his liver, which looked like liver failure. He left behind 3 sons and 3 daughters, while being engaged to his long time girlfriend. Kimbo was only 42 years old, and just a month away from another MMA fight.

Speculation on what caused early death

A childhood friend said that Kimbo had gone to Germany in March and got really sick. However, it was in June that Kimbo was admitted to the hospital in South FL, complaining of "severe stomach pain, shortness of breath and nausea." As a result, he was put in intensive care, and was to be transported to Cleveland to go on a donors list. This situation shocked his friend because he said Kimbo seemed to be doing okay, and then 2 days later he was dead. Furthermore, it was also revealed that Kimbo had planned on withdrawing from his upcoming fight due to high blood pressure and a hiccup problem.

From what has been gathered, Kimbo was not known for doing recreational drugs, but he did have a history of alcohol abuse years ago, even though he wasn't known as a big partier. Meanwhile, we know that being a boxer and MMA fighter, painkillers would likely be involved, and we know that he did fail a steroid test for taking nandrolone decanoate (deca durabolin). This steroid is detectable for up to 18 months, so if he got busted for that, we can only imagine what other steroids with a shorter detection time he was taking, which would not show up in testing. Additionally, he also had a mass on his liver, so we can guess that he was taking short acting oral steroids like halotestin, anadrol, and cheque drops; all of which are very liver toxic and can cause liver issues if misused.

Therefore, it is likely that a combination of using painkiller type opiates, holding too much mass, abusing anabolic steroids, and failing to listen to his body led to his ultimate death.

Want to read about Life and Death of Kimbo Slice on our forums? check out these threads:

DISCLAIMER: The article above for information and entertainment purposes only. All information expressed is per 1st amendment rights, this article is in compliance with all legal articles of free speech.