Team Astana rider Maxim Iglinskiy, who tested positive for Erythropoietin (EPO) on August 1, is likely to confess early next week. 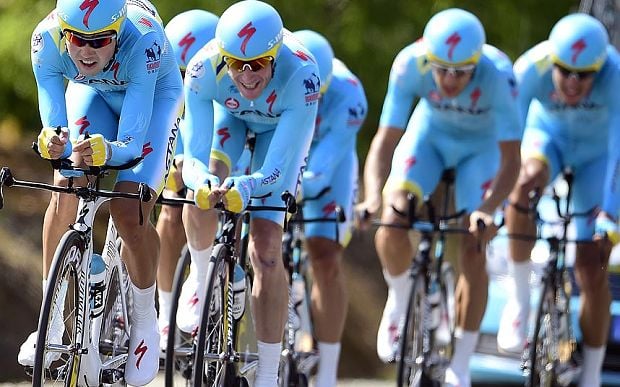 The Kazakh road racing cyclist will confess to doping without his team's knowledge. His positive test was less than a week after he assisted Vincenzo Nibali to victory at the Tour de France this year.

The 33-year-old rider finished 26th at Clasica San Sebastian the day after the sample was taken.

The cyclist's team has withdrawn from the upcoming Tour of Beijing, the final event in the WorldTour calendar, which runs from October 10-14. Team Astana will also be missing the two semi-classics - the Tour of Emilia and the Beghelli Grand Prix. The Kazakh-funded team will be free to take part in the 2015 WorldTour-opening Santos Tour Down Under in Australia in January.

In a statement, Team Astana said Astana Pro Team has moved to act upon the decision by rider Maxim Iglinskiy not to request a counter-analysis of his positive control from 1 August 2014. It was added in doing so the team conforms to rules set by the MPCC, which Astana Pro Team joined in 2013, and has therefore decided to withdraw from the final World Tour event - the Tour of Beijing.

Under the rules of the Movement for Credible Cycling (MPCC), a team is automatically suspended for eight days if there are two doping infractions within a year. This September, Valentin Iglinskiy (brother of Maxim) tested positive for EPO and admitted to doping without the team's knowledge.

In a statement, the Astana team manager Alexandre Vinokourov said Maxim Iglinskiy is suspended provisionally and shall remain out of competition in anticipation of the results from the B analysis in accordance with regulations of the MPCC (Movement for Credible Cycling) to which the Astana team first adhered in 2013. Vinokourov added all Astana Pro Team riders are contractually obliged to respect strict ethical rules and regulations.

Astana is the third team to apply the rule after Rusvelo and AG2R, who both had two doping cases apiece within the time limit. In June last year, the French team AG2R-La Mondiale was made to sit out at the Dauphiné after two of their riders had failed dope tests.

Team Astana is not new to doping controversies. The present Astana team manager Alexandre Vinokourov tested positive for blood doping after he won the time-trial stage of the 2007 Tour de France. The Astana management disclosed at that time that two distinct types of red blood cells were found in the sample of Vinokourov that indicated he had had a blood transfusion before the time-trial stage. Vinokourov vehemently denied the doping allegations and remarked at that time he had spoken to the team doctors who had a hypothesis that there was an enormous amount of blood in his thighs, which could have led to the positive test.