New York Mets reliever Jenrry Mejia has been hit with a doping suspension of 162 games on Tuesday. Mejia, who was just back from an 80-game drug suspension, received the suspension by Major League Baseball following a second positive test for performance enhancing substances. 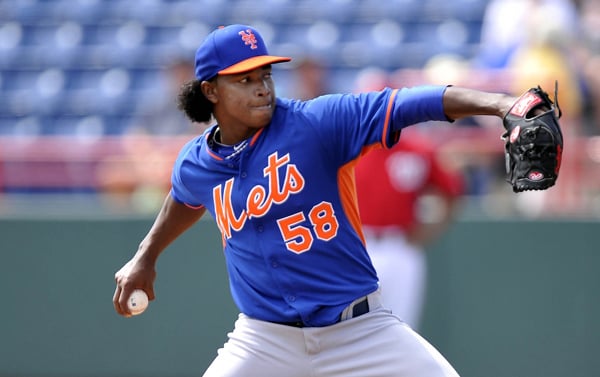 On April 11, the Dominican professional baseball pitcher for the New York Mets of Major League Baseball was suspended after he tested positive for Stanozolol (Winstrol). In a statement, Mejia had remarked he can honestly say he has no idea how a banned substance ended up in his system. This time, Jenrry Mejia tested positive for Stanozolol and Boldenone (Equipoise) and this was announced by the commissioner’s office less than an hour before New York’s game against San Diego. Mejia was subject to six additional urine tests and three additional blood tests because of the first suspension over 12 months following the violation.

Reacting to his suspension, New York Mets general manager Sandy Alderson expressed disbelief and remarked there is a tremendous amount of disappointment and anger and amazement to some extent. Alderson also remarked this is having a tremendously adverse effect on a very promising major league career, and that is a shame and added this is the consequence of making bad choices. Mets manager Terry Collins said a lot of players were shaking their heads when they learned about the suspension of Mejia in the clubhouse before Tuesday's 4-0 win over the San Diego Padres.

The 25-year-old Mejia forfeited about $1.1 million during his first suspension and stands to lose about $866,000 for this latest suspension. To make things worse for him, the New York Mets general manager indicated that there is a possibility that Mejia has pitched his last game for the organization and added he was stunned to learn that the reliever had failed another drug test.

With this suspension, Mejia is on the brink of lifetime banishment from the sport. Jenrry Mejia and Alex Rodriguez are the only major league players to receive a suspension of 162 games for performance enhancing drugs. The case of Rodriguez was however different in the sense that he never tested positive but was nailed for his ties with Biogenesis, which supplied PEDs to players.

Mejia had made a return to the mound on July 12 and was 1-0 in 7 games, pitching 7¹/₃ scoreless innings. Mejia would have been ineligible for the postseason because of this first suspension. However, he would be eligible for the 2016 postseason.

On Monday, New York acquired experienced reliever Tyler Clippard from Oakland for minor league pitcher Casey Meisner. Alderson remarked this deal was "essentially done" after a call was received by the Mets from the MLB informing them about the suspension of Mejia might be announced Tuesday or Wednesday. Alderson said so our track in talking with Oakland about Tyler as well as other players, was independent of this situation.

Mejia’s best friend on the team, Jeurys Familia, decided not to address the issue with reporters. Bobby Parnell, the American baseball pitcher for the New York Mets of Major League Baseball, said baseball is a sacred game and he broke a sacred rule and we try to play the game the right way and do things the right way and it’s very unfortunate that apparently he didn’t.