Spanish professional tennis player Rafael Nadal has denied he has ever used a banned substance to speed up recovery from injury or get an edge. 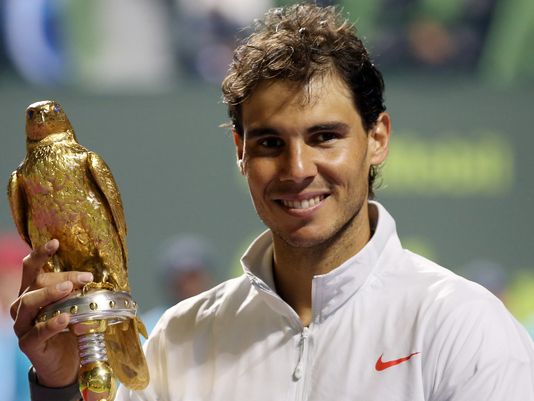 The 14-time Grand Slam champion was asked for his reaction to the failed drug test of Russian professional tennis player Maria Sharapova who recently announced she tested positive for Meldonium during the Australian Open in January. Commenting on it, Nadal took the opportunity to address speculation that he has used performance enhancing drugs. He also remarked Maria deserved to be punished as an example to others. Nadal commented it is difficult to imagine that something like this can happen, but mistakes happen and she should be punished.

Nadal was accused by ex-French Minister for Health and Sport Roselyne Bachelot. The former minister said the seven-month absence of Nadal in 2012 was "probably due to a positive doping test".

Nadal was out for seven months from July 2012 with tendinitis and then a stomach virus.

Reacting to the allegation, the Spanish Olympic Committee remarked the Spanish tennis star had passed "countless doping tests". Nadal was also defended by Real Madrid that said its "exemplary" club member represents the fundamental values of sport. In a club statement, Real Madrid said Nadal's greatness and his incredible achievements have always been based upon a foundation of exemplary conduct, unwavering work, talent and astonishing levels of commitment. The statement further read that our institution, this being the case, considers the attacks made on him by former minister Roselyne Bachelot to be unjustifiable and unacceptable. Real Madrid coach Zinedine Zidane said he feels bad for Rafael Nadal because he is a gentleman and a person who has shown the values he has and that everyone loves.

The 29-year-old Spaniard said he is a completely clean guy and a bit tired of the rumors. Nadal remarked he has never had the temptation of doing something wrong and also said he is an example for the kids and if he is doing something that goes against that, he will be lying to himself, not lying to his opponents. Widely regarded as one of the greatest clay-court players in history, "The King of Clay" has never failed a drugs test but has been the subject of speculation that he uses performance enhancing drugs.

Nadal remarked he has reaped advantages of some new treatments such as stem-cell therapy and Platelet Rich Plasma (PRP) therapy for his knee complications. The Spaniard said the first time with PRP it worked fantastic and the second time it was bad and he had to stop playing tennis for seven months.

Former French Open champion Yannick Noah wrote a newspaper article in 2011 wherein he accused Spanish sporting success was due to doping. A satirical French TV show a year later featured a life-size likeness of Rafael Nadal filling up the gas tank of his car from his own bladder before he was being pulled over by traffic police for speeding. Belgian former professional player Christophe Rochus questioned Nadal in 2013 to dominate the French Open of 2012 and then be injured two weeks later at Wimbledon.